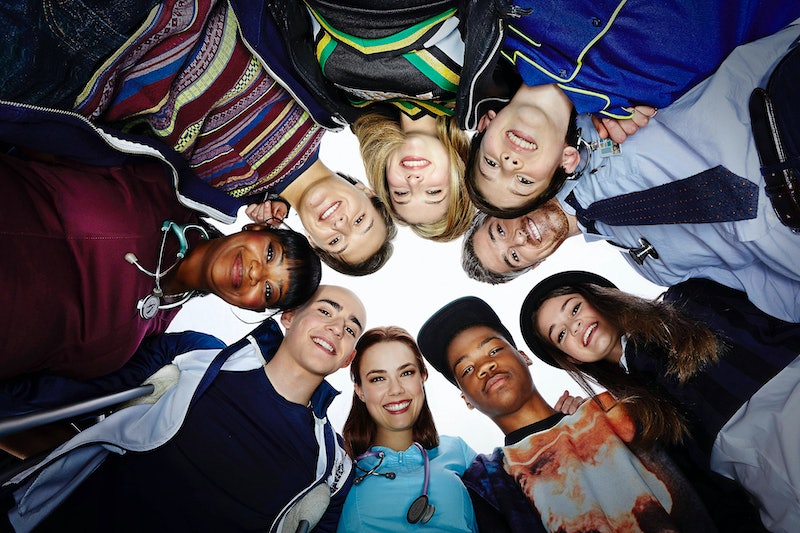 I'll be honest, when I first heard the name Red Band Society, I thought this fall premier was somehow about those NSFW movie trailers, and I didn't understand how that could be the plot of a TV show. But I quickly learned that, actually, Fox's new teen drama Red Band Society is set in a pediatric hospital ward, and that it tells the story of a bunch of teenagers stricken with life-threatening conditions. The titular "red bands" refer to the hospital ID bracelets they all wear, and not the aforementioned dirty movie trailers. The characters all live together at Ocean Park Hospital where, in addition to getting treatment, they also take classes, date, and generally behave like any normal cooped-up kids would. It's like high school, only with bigger consequences: they're all also facing their own mortality. But what exactly is a Red Band Society?

I've searched high and low for some evidence of Red Band Societies popping up in hospitals or hospices, but it appears the term is unique to the Fox show. The name, however, does stem from the series' source material.

Red Band Society is based on a show from Spain called Polseres vermelles, which literally translates to Red Bracelets from Catalan, the regional dialect spoken in parts of Spain. Polseres vermelles was itself adapted from a memoir by Albert Espinosa who, according to his website, was hospitalized with three bouts of cancer between the ages of 14 and 24. Like two of Red Band Society's main characters, he lost one leg while undergoing treatment. He also had one lung and half his liver removed before finally going into remission. As in the show, Espinosa and his friends had a "goodbye party" for his leg before he went into surgery. Here's a sample of Espinosa's tone (translated from Spanish), which will inevitably make its way into Fox's incarnation:

When someone dies he becomes the people he has known. Their memories remain, life is divided between people who knew him. It's like they multiply in lots of people.

But it's still a bit strange to name an entire series after little plastic bracelets. However, while most people

might find hospital ID bracelets annoying and uncomfortable (Scratchy plastic? No thanks.) for the characters on Red Band Society they are important reminders of how far they've each come. Each bracelet stands for an admission to Ocean Park Hospital, which was inevitably followed by a round of some type of treatment, including surgery, chemotherapy, or other painful medication regimen.

In order to deal with the terrible hand they've been dealt, all of the characters come together and bond over their varying states of misfortune. The ringleader of the group, Leo (Charlie Rowe) and newcomer Jordi (Nolan Sotillo) both have bone cancer; Leo's best friend Dash (Astro, aka Brian Bradley, of The X-Factor) is being treated for cystic fibrosis, a disease in which mucus builds up in the lungs, and which can eventually cause extreme difficulty breathing, among other problems; Mean cheerleader Kara (Zoe Levin) has an enlarged heart (it's ironic, get it?); Leo's sometimes-girlfriend Emma (Ciara Bravo) has an eating disorder; and the show's narrator, Charlie (Griffin Gluck), is stuck in a coma. Each member of the Red Band Society, as they call themselves as a way of finding community in a hopeless place, has at least one long-term stay to the hospital under his or her belt, and therefore has earned their place in the group.

There's a lot of gallows humor in Red Band Society. Like many outsider groups, the kids at Ocean Park seem to find strength in reclaiming the "negative" parts of their identities. They joke nonchalantly about their illnesses and wear their hospital bands proudly. For them, being a part of the Red Band Society means having a place among friends in an unpredictable world.