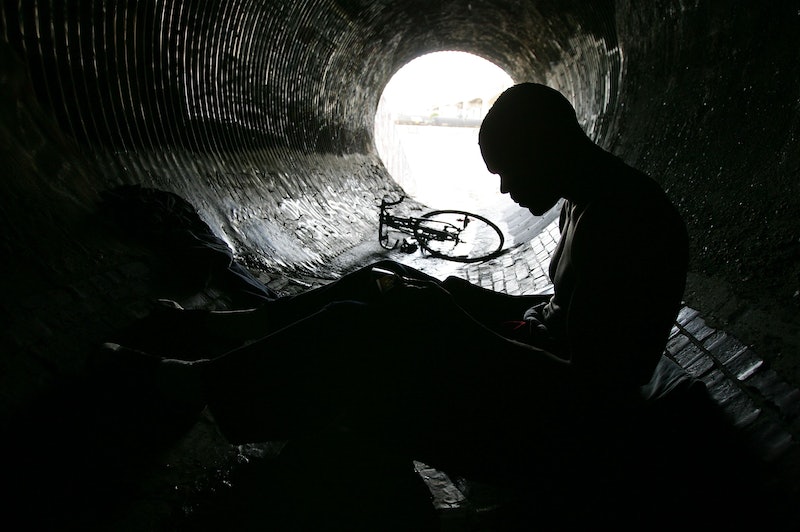 Do we really need any more evidence that depression isn't just a matter of willpower? Either way, we're getting it: Scientists at Northwestern University have developed a blood test for depression. The test is a pretty huge deal: previously, psychologists have only been able to diagnose patients based on the criteria listed in the Diagnostic Statistical Manual. These symptoms, such as lack of motivation, early morning wakefulness, and change in appetite, are largely self-reported by the patient, which has never been as objective a method of diagnosis as scientists prefer. A blood test is the first concrete, quantitative measure available for depression, which may help reduce stigma as well as provide a way to quantify treatment success for individuals.The study took blood samples from participants diagnosed with Major Depressive Disorder (MDD) before and after 18 weeks of Cognitive Behavioral Therapy (CBT), a common behavioral treatment for depression. Researchers then compared the samples of depressed patients with those of participants without MDD, finding that the levels of 9 RNA blood markers were significantly different between the two groups. Furthermore, there were differences in RNA markers among the depressed patients who improved with therapy compared to those who did not. According to Science Daily in an interview with the lead author on the paper, Eva Redei, believes this difference "could be used in the future to predict who would respond to the therapy."

Depression affects around 9 percent of adults in the United States, according to the Center for Disease Control, and although CBT has solid evidence in its favor, it does not work for everyone. Generally a combination of therapies, medication, or both is the most successful, but a screening process to detect those who are unlikely to respond to certain treatments would make recovery that much more successful. Concrete evidence of the existence of depression could also help reduce the stigma surrounding the illness; research shows that this stigma is frequently internalized, which makes treatment more difficult. However, pending Food and Drug Administration approval, the test could have an enormous impact on the millions of Americans suffering from MDD. Images: Getty (1)

More like this
I'm Going Off My Bipolar Meds to Try to Get Pregnant
By Anonymous, as told to Anna Goldfarb
5 Crystals For Anxiety
By Megan McCarty
5 Crystals To Manifest Better Sleep
By Megan McCarty
Michigan’s Governor Is “Going To Fight Like Hell” To Protect Abortion Access
By Andrea Zelinski
Get Even More From Bustle — Sign Up For The Newsletter