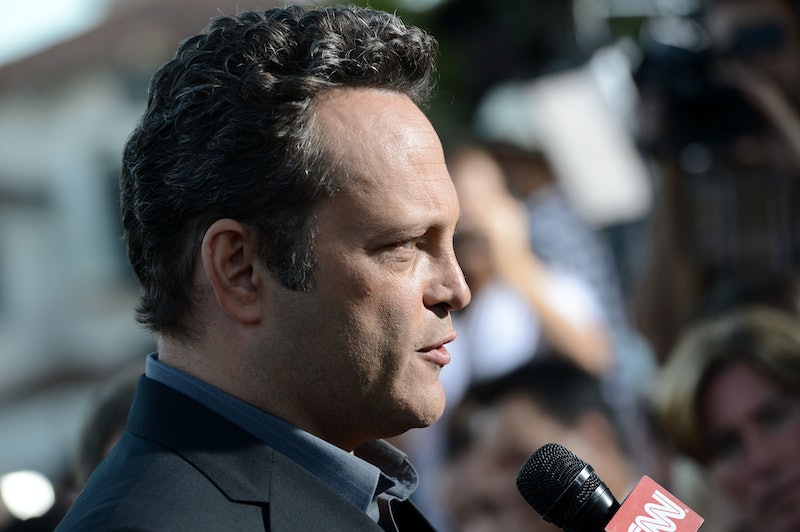 With the news that Vince Vaughn will be co-starring in True Detective Season 2 with Colin Farrell, the Vaughnaissance hath cometh. The return of the HBO crime drama has been one of the most-talked-about topics in the television Twitosphere: The hashtag #TrueDetectiveSeason2 sparked both rumors and hilarious pairings for who would fill the very big shoes of Matthew McConaughey and Woody Harrelson. Now those speculations can be put to rest with Farrell and Vaughn officially set to take over.

The first unforgettable season of True Detective took us into the mystical and murky landscape of Louisiana, whereas the second season is going into production in California. According to a press release from HBO about the new season, "Three police officers and a career criminal must navigate a web of conspiracy in the aftermath of a murder." Surprisingly, Vaughn will play the bad guy Frank Semyon — well, at least we think he's the bad guy at a very base level. It's True Detective, who really knows who's the culprit from the start? Semyon is a criminal-who-turned-legit whose empire is compromised when one of his partners is murdered.

Farrell will play officer Ray Velcoro, who is aligned with the police and the mafia. Though we have Farrell and Vaughn set, there are still more cast members to be announced.

By the sound of these very early details of the plot and characters, Vaughn will be playing well out of his comfort zone. The tall and bombastic actor is best known for his work in comedy. To get you accustomed to the True Detective-ification of Vince Vaughn, here's a Beanie from Old School and Rust Cohle mash-up. Enjoy.

See? Vaughn isn't as far-off of a choice as you may have expected.