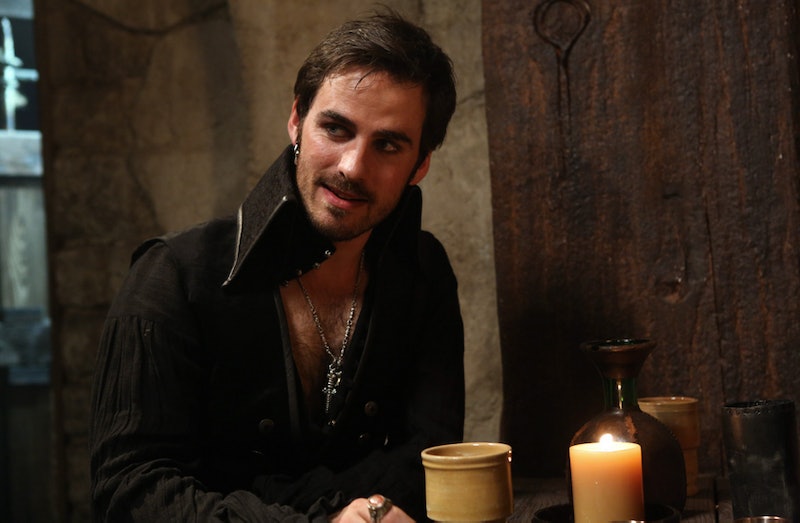 It's been relatively impossible to not fall in love with Once Upon A Time 's reside pirate, Colin O'Donoghue's Captain Hook. I mean, he managed to get Emma to fall in love with him, so it's no surprise that he's won the hearts of legions of OUAT fans, including myself, as well. And it's been a long summer without Hook and Emma's magical romance playing out on our TV screens every Sunday night. So, with OUAT Season 4 premiering on Sept. 28, how can you fill your Storybrooke and Hook-less days between new episodes with O'Donoghue? Well, it's not going to be easy, but it's possible.

Surprisingly, O'Donoghue hasn't been on any of your favorite shows before OUAT, with the exception of a one-episode stint on The Tudors in 2009. Unless you're from Ireland or have spent a significant amount of time there in the past 10 years. O'Donoghue, who's originally from Drogheda, Ireland and graduated from Gaiety School of Acting, launched his career in the UK with stage productions and TV roles. It wasn't until his role on the The Tudors that the actor who looks incredibly good in eyeliner made the big move to American television and film with roles opposite Anthony Hopkins and as Captain Hook on Once Upon A Time.

So, where else can you see O'Donoghue outside of Storybrooke? There are a few places.

O'Donoghue will star in The Dust Storm as the film's main character, Brennan, a former musician who reunites with Nora, the girl who broke his heart, over a weekend in Nashville. The film's Indiegogo page says that the it's "a romantically brutal look at how we care about so much about a person that we can't let go, even though they drive us so insane that we wish that we could push them away."

O'Donoghue starred opposite Anthony Hopkins in this 2011 film as an American seminary student who travels to Italy for an exorcism course. Unfortunately, there was no eyeliner in this film.

Loved seeing O'Donoghue in his royal best in the Season 3 finale of OUAT? Well, you can catch him looking handsome in some similarly classy duds in the Season 3 episode of The Tudors , "The Undoing of Cromwell." The actor plays Duke Philip of Bavaria on the Showtime period drama.