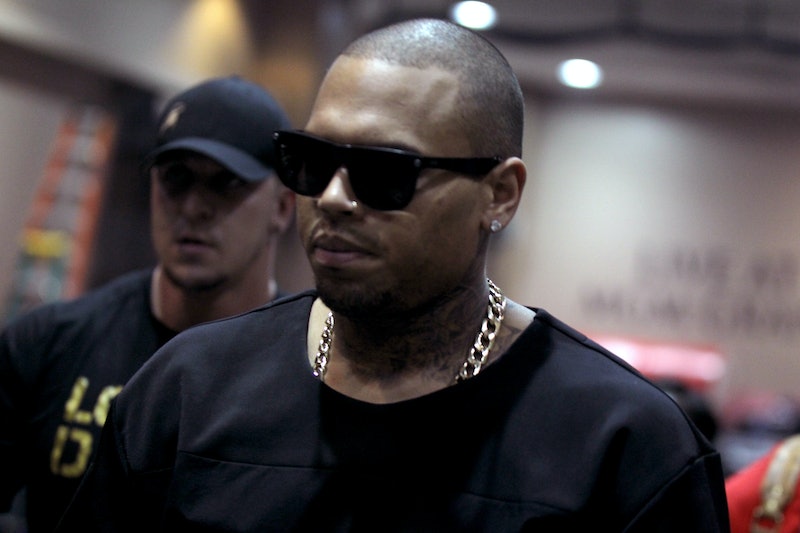 It's not very often that I find myself wanting to defend Chris Brown, but this time he is making headlines for something that's not entirely his fault. He has a notorious history of violence and assault that still follows him to this day, especially since Brown literally just got out of prison in June. He might have settled his legal issues, but if he's not careful then he's going to find himself right back in hot water. His tumultuous history with the law is what led to this most recent controversy at a Houston club this weekend, even though, honestly, he's kind of blameless in this situation. TMZ reported that Brown shoved a woman at a nightclub, but that wasn't the whole story.

The accompanying videos of the incident show that the singer was trying to exit the club with girlfriend Karreuche Tran in tow when a female fan suddenly launched herself at him and grabbed his face, trying to kiss him. Brown twisted away and blocked her with one arm before his security detail managed to grab her and lead him forward. The real trouble in the incident comes in when you notice how quickly the woman flew back when he brought his arm up, but if you watch closely then you will notice that moving his arm is all that he did. He didn't actively shove her; he just blocked her movement forward and she was grabbed by his security.

And, to be honest, the response is understandable. Yes, he has a history incident of violent overreactions that lead to grievous injury in others, but his actions this weekend were neither violent nor an overreaction. From the looks of the videos, the woman was attempting to kiss him or at the very least touch him, and he did not consent to either thing. Defending yourself from potential sexual assault is your right as a human being, whether you're a male or a female. Had it been any celebrity besides Brown, we would be sympathizing with him or her. However, because it is Brown, the situation appears more complicated.

Ever since his release from prison, all eyes have been on Brown to see if he's going to fall back into his old habits or has truly reformed. And, quite honestly, his so-called reformation has been choppy at best. Wherever he goes, trouble seems to inevitably follow, but because of that, there's no need to make up incidents of misbehavior. He has done, and might do, a lot worse than defending himself from unwanted contact from strangers.

I agree with TMZ when they say that he probably should have let his security handle the entire altercation, but I also acknowledge that there was very little time to decide between pushing the woman back and protecting his face or just letting the contact happen. Hopefully, this isn't a troubling sign of a return to past behavior but instead exactly what it looks like: self-defense painted in a negative light.