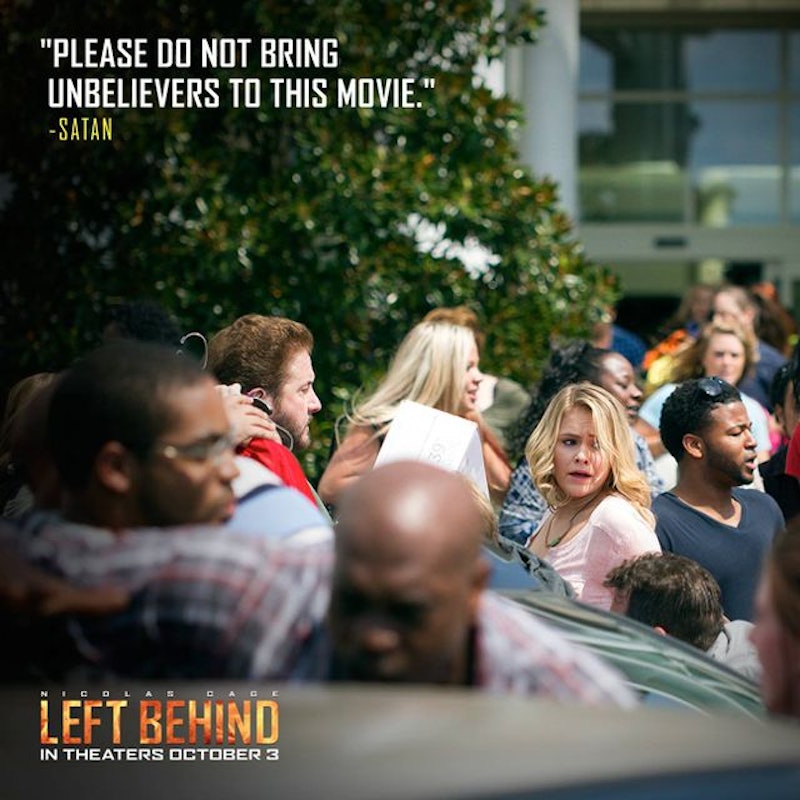 Hey, what's up, it's me, Beelzebub...but you can just call me Satan. Look, I was just minding my own business, having my favorite late night snack of human suffering at the E.R. at 3 am, when I came upon this poster for the movie Left Behind . I have no idea what this movie is, but I looked it up: apparently, it's based on a series about the Biblical prophecy of the Rapture, in which all the good people get sucked up to heaven (by a vacuum tube? I don't know) and everyone else is, you guessed it...left behind.

Super, fine. Humans can do whatever, I usually get their souls in the end anyways. But this thing has my name on it. That's right, there's an actual endorsement: "Please do not bring unbelievers to this movie." I just want to clarify: I have nothing to do with this. I have no idea where they came up with that quote, but it wasn't from me. But either way, I'm going to go ahead and completely endorse this movie.

Why? Well, first of all, I'm a big fan of the cast. I feel like I've really had a big hand in Nicolas Cage's career, and he's done a lot of great work (I'm a huge fan of Vampire's Kiss). And I'm just a fan of Chad Michael Murray as a person — cheating on your wife with a senior in high school? I just feel like I've been very influential in Murray's life, although I don't like to take too much credit.

As for the nonbelievers, they can go ahead and do as they please. After all, this isn't the first "end of times" picture Cloud Ten Pictures has released. In fact, they've been releasing more or less the same kind of film since 1997, but I have yet to see any huge results. Hell, I may be in the audience myself — after all, I do love a good disaster movie.

So while I can't claim the comments on Left Behind, please keep a lookout for my glowing review of Adam Sandler's next movie...trust me, it's a masterpiece.