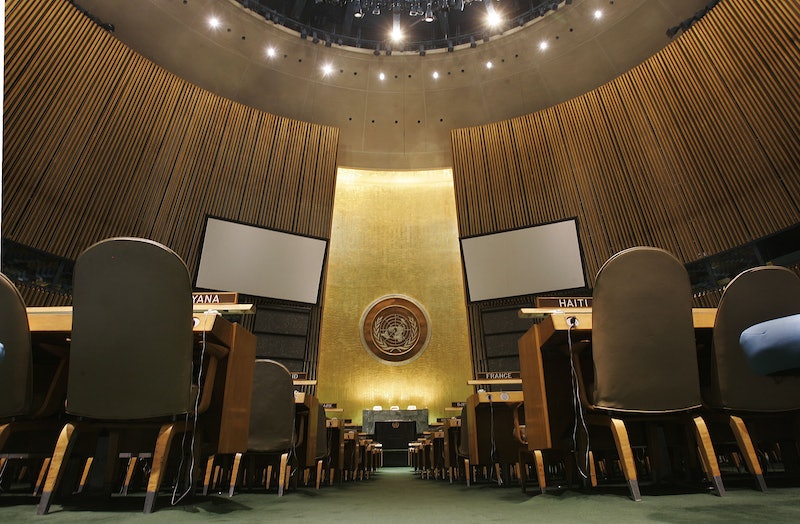 When I first heard that Iceland's UN conference on gender equality would only invite men and boys, my first instinct was to check to see if the story originated with The Onion. But it seems that the universally negative reaction had an impact — Iceland and their co-sponsor Suriname have announced the "men-only" conference will now include women after all. So it seems they're finally trying...sort of.

The conference, which is still scheduled to take place in January 2015 at the UN headquarters, was announced as a conference on gender inequality with a special focus on violence against women. However, in the interest of getting men and boys more involved and interested in gender issues, the conference was designed to as a "barbershop" conference, with no women whatsoever — which might be what you'd expect from people who think barbershop is exclusively male. Now, however, Iceland says there will be women after all, even though the conference will be designed for men and boys.

Well, at least they're trying.

According to Iceland's UN ambassador, Henry L. Mac Donald, explained that, “It’s not that women aren’t involved, but we will focus on how to make men and boys part of the discussion. It’s not going to be only men; women will be participating."

It's unclear what roles women will play in the conference, which is still in the planning stages, but it's good that they recognized early that this idea of a "barbershop" conference was a bad one.

Iceland's Foreign Minister, Gunnar Bragi Sveinsson, who initially announced the conference also tried to help with the backtracking effort...by elaborating on the importance of getting men involved. “If we’re going to change things like women’s equality or stop violence against women," Sveinsson said, "we, the men, have to be ready and able to talk about it because we are part of the issue and we have to be part of the solution."

All of which is very true. There is exactly zero reason those things can't happen in collaboration with women as opposed to separate from us, but very true statements.

But then it turns out MacDonald also said this: “The idea [of the conference] is to gather males from all walks of life ... to discuss this issue in a serious manner in order to find solutions for violence against women from a male perspective.”

Let me repeat that: "in order to find solutions for violence against women from a male perspective.”

As I wrote when this story first broke earlier in the week:

By its very nature, violence against women ... is something best understood by women . Men have the luxury of not needing to think about this stuff; women, largely, do not have that luxury, and as such it is the work of women that has brought these issues to the forefront, and it has been women who’ve provided the analytic framework necessary to even discuss these problems. To dismiss all of that by not including female voices is to devalue the decades of work that many women have done. And to act as though women are not needed in a conversation about women’s issues is not only unspeakably arrogant but also delusional.

And it seems that even though the conference will now include women in some capacity, its original problem of devaluing women's past work and ignoring the necessity of women's ongoing role have not in fact improved by much.

When it comes to feminism, I want men and boys involved as much as the next person. These are huge problems that we're dealing with here, and the more people trying to solve them, the better. But men need to get it through their heads that just because this work is new to them, that doesn't mean it's new. And just because the people who have come before are women, that doesn't mean you can gloss over their contribution or their pivotal role.

So seriously guys, we appreciate you letting us in the clubhouse, but maybe now would be a good time to acknowledge that it is our clubhouse. And you're invited and all, but that doesn't make you to owners. OK?