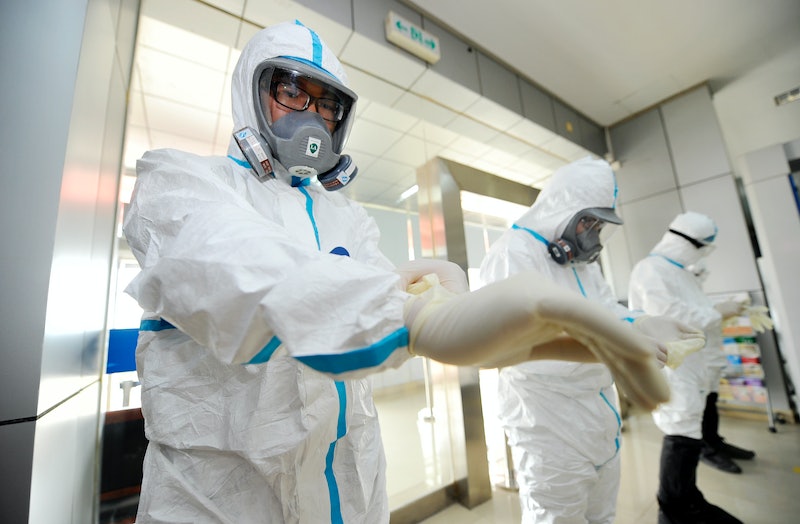 A day after the Dallas Ebola patient's host family was held under armed quarantine in their own home (after trying to get out), they've finally been moved from the disease-ridden apartment to a temporary new residence. Meanwhile, ten more people who are considered at high-risk of getting Ebola have been now been put under isolation, with another 50 people being closely monitored for any sign of the illness.

Ever since Thomas Eric Duncan, the first patient to be diagnosed with Ebola on U.S. soil, was taken to the Texas Health Presbyterian Hospital Dallas, his host family has been waiting in an isolated limbo. Although they're showing no signs of the illness, they're being closely monitored, and will have to stay being watched for the next three weeks or so. Clearly, this did not appeal to them: after being told to stay inside — and failing to comply — the family was put under armed guard, with no outside visitors allowed.

As Dr. Michael Gardam, director of infection prevention and control at the University Health Network in Toronto, told CBC:

What we're seeing in the U.S. is this full court press, absolute over-aggression to make sure nothing happens. They will leave no stone unturned so that there is no way this is going to get away on them. If the same thing happened in Toronto, we'd do the same thing.

On Friday, a hazardous-materials cleaning crew finally showed up at their Texas apartment, where Duncan had been staying before he was sent to the hospital, to clean it out. There, they finally collected towels, sheets, a suitcase and the mattress that Duncan had used — all sure sources of infection, which had been sitting around the apartment since he was hospitalized. (In fact, the crew had also gone there the night before, but they hadn't been able to actually do any decontaminating, because they hadn't had the right permits.)

Though the CDC has come under fire for the delays in the cleanup, the process is tricky — all of the toxic material has to be disposed of in a way that will ensure no one is put at risk. As Dr. Tom Frieden, director of the CDC, said on ABC’s “Good Morning America”:

This is, after all, the first time we’ve ever had a case of Ebola in the US and there are issues to make sure that when things are removed, that it is not going to be disposed of in any way that could potentially be a risk.

Although no one who was exposed to Duncan has, as of yet, shown up with any Ebola-like symptoms, officials are playing it safe. The ten people who are highest risk of exposure are being closely watched, and have since also been put under isolation — let's hope these guys do stay inside.