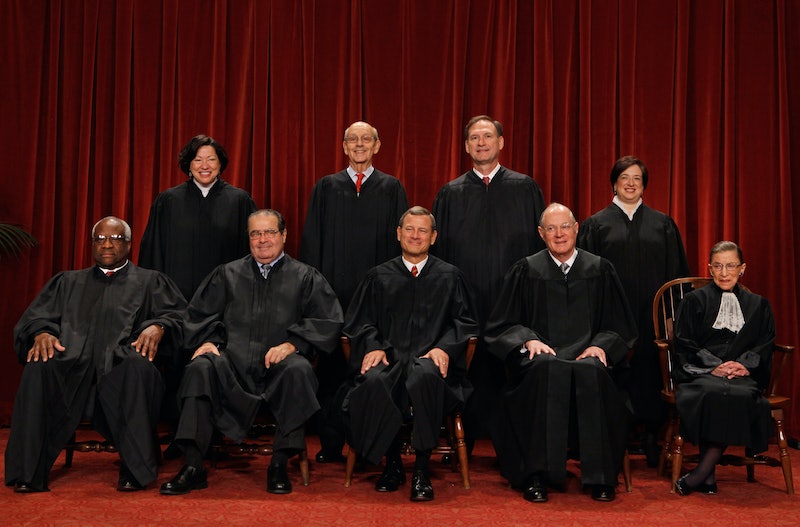 Like a strange (mostly) boy band or celebrity entourage, the Supreme Court justices will throw back the red velvet curtains, wind whipping back the hair from their balding heads, and begin their new term Monday. SCOTUS IS BACK, BABY, and they've got a full docket to fill their time before the June recess. But while the fab nine are settling legal quandaries on teeth whitening (really), there are a handful cases left waiting in the wings that I hope SCOTUS gets to before the term ends.

There are some pretty compelling cases on the argument schedule already, including pregnancy, housing, and religious discrimination disputes. Yes, three separate discrimination debacles — hello, 2014! But a Florida commercial fisherman caught destroying undersized grouper and charged under a federal law used to prosecute Enron employees will also get his time in the Supreme Court. As will the North Carolina Board of Dental Examiners, who were accused by the FCC of trying to squash rival teeth whiteners at day spas and tanning beds.

Not to say fish shredding and white teeth aren't important, but when they are taking on white-collar crime cases in lieu of, oh, I don't know, gay marriage, it seems like SCOTUS is skirting the big issues.

Here are a few of the cases that I am crossing my fingers will land in front of the Supreme Court this term...

In 2013 the Supreme Court slapped down two key rulings that paved the way to marriage equality. On the same day, SCOTUS upheld a lower court's decision to strike down California's Proposition 8 and ruled parts of the Defense of Marriage Act unconstitutional. The problem is that after that epic gay marriage mic drop, they stepped back all like, "So y'all can handle this from here, yeah?"

The Supreme Court announced on Monday that it was opting out of reviewing gay marriage challenges from Utah, Oklahoma, Virginia, Wisconsin, and Indiana. But all of that could be temporary. Staying out of the debate could be a tactical decision to make sure that judges have shored up enough votes on either side, or it could be a way of letting state courts still deciding marriage equality cases duke it out and give them a better landscape of how to make any sweeping decision. Regardless, of all of the issues taking a backseat for now, this one is almost certain to see some action before the end of the term.

Last week 80 percent of abortion clinics in Texas closed due to the implementation of a draconian abortion law passed by state legislators last year. Texas successfully implemented absurd regulations for abortion providers that many states are gunning for, including requiring hospital admitting privileges and bringing clinics up to ambulatory surgical center standards.

There will almost certainly be a challenge to the decision, handed down by the 5th U.S. Circuit Court of Appeals, that will take it to the Supreme Court. Hopefully, SCOTUS will be able to hear this or one of the numerous abortion-rights cases going through the courts. But for now, Texas is serving as a picture of just how easy for state courts to strip women of guarantees made to them by a little something called Roe v. Wade.

Once again, we find another handful of states in the perennial racist hotbed of voter ID laws. Both Wisconsin and North Carolina have already called for action in the individual states' voter ID laws. Justice Elena Kagan received an emergency filing from the state of Wisconsin to block an identification requirement that leave one in ten registered voters in the state unable to cast a ballot.

North Carolina, on the other hand, has asked for two of its voting measures to be reinstated. Basically, there are a lot of voter woes happening at present. Even if SCOTUS decides to put a temporary stop on Wisconsin's voter ID law, it's only a Band-Aid for a bigger issue that has plagued states. Can't we put an end to a practice that is strongly identified with discriminatory intent?