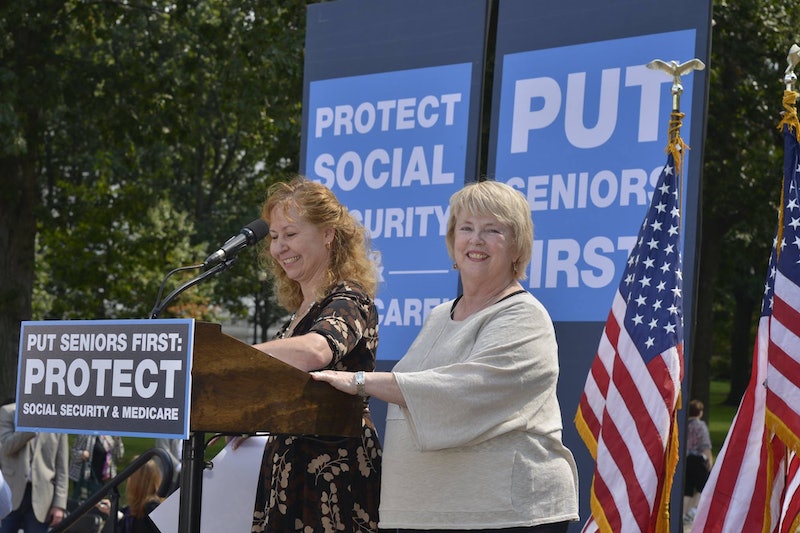 Although they have no relation to the Koch Brothers, the Koch Sisters —spiritual sisters, not biological — have launched a campaign to challenge the right-wing, billion-dollar political backers. Two "average women," Joyce and Karen Koch, make up the Koch Sisters, a grassroots project of the labor organization AFL-CIO. The message of their campaign is simple: influence politics without "buying democracy."

Both Koch Sisters have union backgrounds — 51-year-old Karen is a teacher, while Joyce, 71, is a retired social worker. So, basically, they really are the antithesis of the Koch Brothers. "While we share the same last name as the Koch Brothers, we definitely do not share their values," the sisters wrote in a recent op-ed for The Huffington Post.

And that's just the beginning. The sisters have laid out their countless differences with their conservative brothers, and the views couldn't be any more disparate: They support Medicare and Social Security, the middle class, and climate legislation, compared to the Koch Brothers' track record of advocating for slashed Medicare and Social Security budgets, fighting unions and backing climate-change deniers.

"While the Koch Brothers wield unprecedented and unrivaled money to pollute America's politics," the Koch Sisters wrote, "we have and will always support the strongest political force in America: working people."

The Koch Sisters began appearing in political TV ads — most of which were directed at the Koch Brothers, naturally — in early September. In addition to attacking politically-bought campaigns, the sisters are also championing voter engagement, encouraging citizens to register to vote before the November election deadline. "We've got out voices and our votes — if we use them," Joyce Koch says in one ad.

Their most recent 30-second TV spot, called "Obedience," is slated to play this week in the crucial battleground states, including Wisconsin and Kentucky — just in time for the campaign sprint before the midterm elections.

"There has always been money in politics, but nothing like there is today," Karen Koch says in the ad.

"I think the Koch Brothers expect obedience," adds Joyce Koch with a laugh.

So, how did these two women with the Koch surname end up being the Koch Sisters? The liberal duo told ABC News' Erin Dooley they were contacted by activists at AFL-CIO, who were looking to create a group of Koch Sisters to counteract the influential billionaire brothers.

Joyce Koch admitted that she wasn't "into politics" prior to the campaign, but became hooked almost immediately. "I think I’m the sleeping beauty here," Joyce Koch told ABC News. "They came and gave me a kiss on the forehead and they woke me up, and now I am really interested in politics."

But the point of the Koch Sisters campaign isn't to be wealthy experts. In fact, it's quite the opposite. "We’re regular people that have regular ideas for the common person, for the regular Joe," Karen Koch told ABC News.

And just like any movement that's for the people, by the people, anyone can be a Koch Sister, regardless of your list name. Among the women who have already joined the sisterhood are Sen. Elizabeth Warren, House Minority Leader Nancy Pelosi and NETWOK executive director Sister Simone Campbell. That's some pretty goo company.

"You can be a Koch Sister, too!" says Joyce Koch. "There's plenty of room in this family."