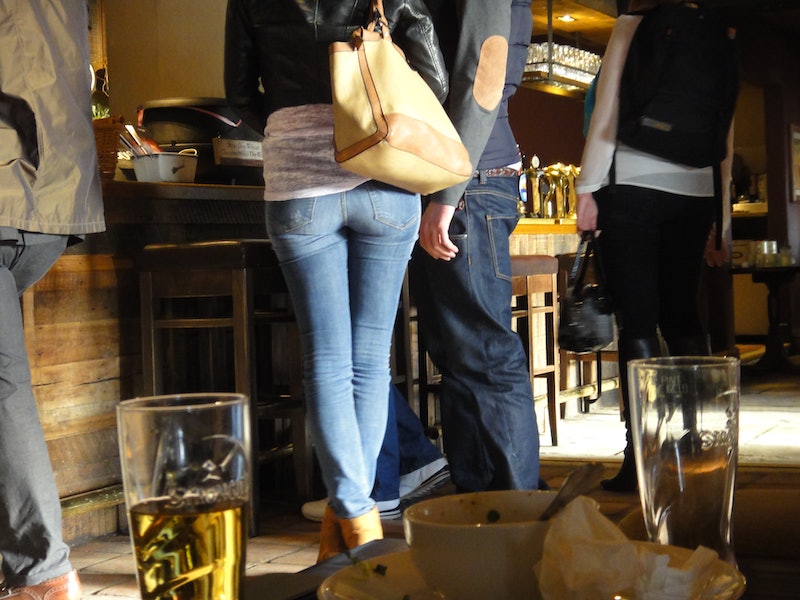 Is simply standing with your legs really far apart to maintain the illusion of a thigh gap just not cutting it anymore? Ever wished you could just miraculously buy one since you literally can't achieve the results through exercise? JustBoobs Sketch, a comedy group comprised of four women, posted a video recently in which you can do just that, and it's both hilarious (what isn't funny about four women waddling around with wooden sticks between their legs?) and on-point social commentary, because it highlights how ridiculous and unattainable the thigh gap is in the first place.In the new sketch, a new retailer called Thigh Gap (a play on The Gap, though I think that is just a convenient pun and not meant to indicate that The Gap itself is particularly complicit in the whole "you must have a thigh gap" idea) has emerged, and it promises to give you what formerly only starvation diets or excessive exercise could provide. With their jeans forcing your legs apart to create the desired space, you, too, can atone for the "sins of [your] womanly figure!" And for the low price of only $69.99. The video points out how absurd — not to mention dangerous — the societal obsession with the thigh gap is, from advertisements ("Don't let unrealistic beauty standards get you down, let them get you shopping!") to the perception that no matter how many doctors claim you're healthy, you're not "in shape" unless you conform to ideal beauty standards. Everything is summarized nicely with a slogan that honestly doesn't seem too far from reality, "Thigh Gap: Because you aren't good enough."

However, there's no need to lose hope of ever finding jeans that fit just yet. Some clothing lines have begun pointedly carrying jeans for women with normal-size thighs. Here's hoping this trend replaces the thigh gap soon!