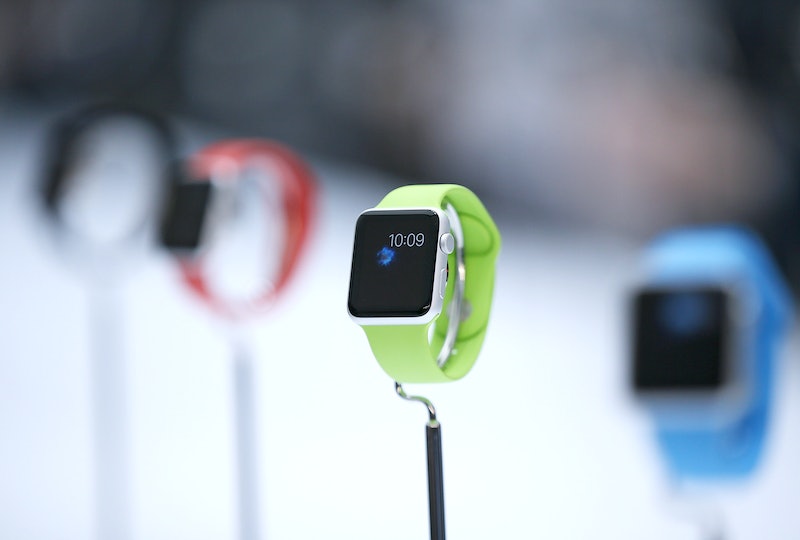 Move over Rolex — there's a new high-fashion watch in town. The Apple Watch made its debut on the cover of Vogue China, worn on the lovely wrist of model Liu Wen. This development is somewhat surprising to me, given that the Apple Watch, is, well, not very stylish. It literally looks like an iPhone on a strap. But the fashion world seems desperate to jump on the wearable tech bandwagon, and so I guess we'll be seeing more of the timepiece in our editorials.

The Apple Watch was announced to great fanfare in the midst of Fashion Month, making it easy for the style set to hop on board. Parisian retailer Colette even held a special event celebrating the arrival of the watch, during which Wen Instagrammed a photo of herself wearing the device with the caption "My second meeting with the Apple Watch, this time in Colette! The first time? Well, you’ll see soon.” Some, including Bustle's Sara Tan, speculated that Wen would be the face of Apple Watch's first ad campaign. Turns out that a Vogue China cover was secretly in store!

Styled by Karl Templer and shot by photographer David Sims, the November 2014 Vogue China cover features Wen in a striped Céline dress and statement necklace, the Apple Watch displayed prominently on her left wrist. While the model looks gorgeous, I have to admit — this feels a bit like a flashy ad for the watch instead of a magazine cover. The placement of the device seems a bit incongruous with the rest of the outfit and the sparkling accessories adorning Wen's neck and opposite wrist.

Wearable tech is on the rise, but time will tell whether these types of devices are just a fad. In the meantime, expect to see a lot more of the Apple Watch on magazine stands.