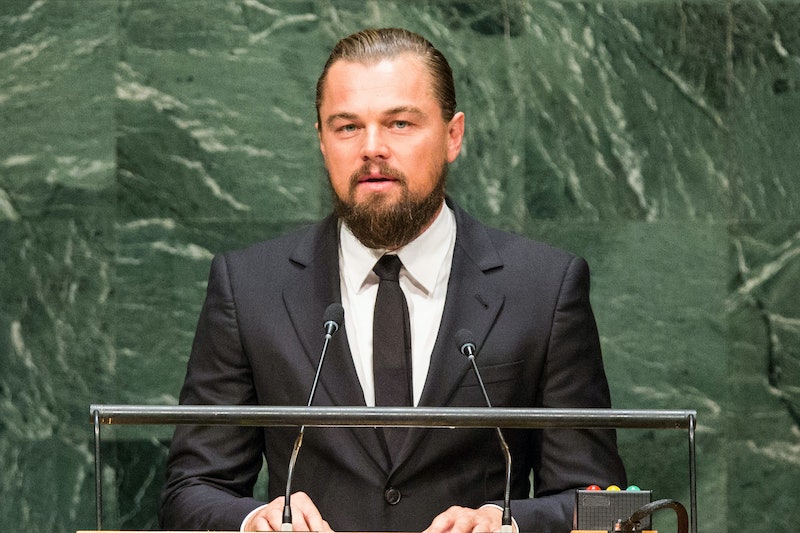 I’ll admit that even with the interesting grunge-meets-homeless look that Leonardo DiCaprio has been sporting these days, my love for The Wolf of Wall Street actor will never fade. From seeing his interpretive dancing at Coachella to viewing pictures of him having a water gun fight with friends this past summer, his very apparent fun-loving personality is hilarious and quirky. Even better, though, he's also influential, he's widely recognized for his philanthropy and activism efforts with various organizations — and if there’s anything better than a shirtless Leo and water guns (hard to believe, I know), it’s definitely Leo helping to protect innocent animals. So, it should go without saying that I'm already sold on his next project: Leonardo DiCaprio is fighting to save gorillas with his upcoming Netflix documentary, Virunga.

If you haven’t already been swooning over DiCaprio for the past two decades or so, then this is your opportune moment. On Nov. 7, the documentary will premiere in theaters in New York and Los Angeles, as well as on Netflix. Virunga, directed by Orlando von Einsiedel, reportedly "follows an embattled team of park rangers and the endangered mountain gorillas they protect, as they are caught in the crossfire of poachers, militia and industry in Africa’s oldest national park."

DiCaprio will be doing his part as an executive producer, helping the project come to life thanks to his production company Appian Way.

“Films like Virunga are powerful stories that are a window into the incredible cultural and natural diversity of our world, the forces that are threatening to destroy it, and the people who are fighting to protect it,” DiCaprio said. “Partnering with Netflix on this film is an exciting opportunity to inform and inspire individuals to engage on this topic.”

I’ve always been in awe of DiCaprio because of his time and dedication to so many causes he’s truly passionate about, despite also having a busy career as an actor. And as an animal lover and avid watcher of many of Netflix’s documentaries, I’m beyond excited to see this — and, hopefully, it'll bring a lot of much-needed attention to this issue.