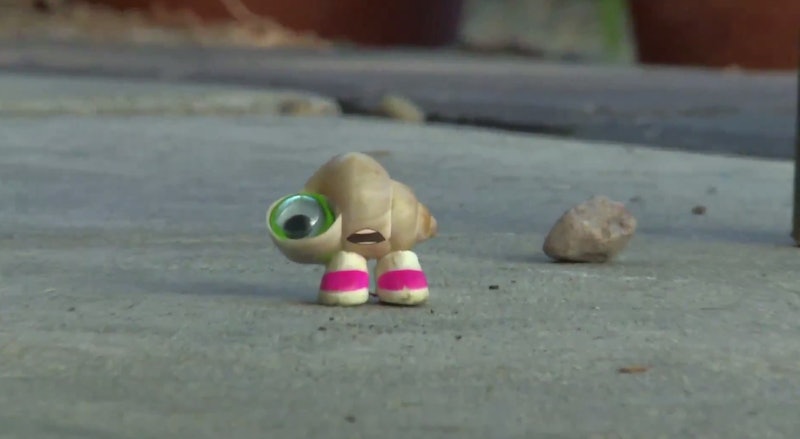 It's been a while since we as a collective have visited with our tiny shell friend, but now Marcel The Shell With Shoes On has been reunited with his adoring populace. All is as it should be: He's still a shell, he's still got shoes on, and he's telling us all kinds of things about shrimp intelligence and where exactly he applies his deodorant. He even sings a song! This is what joy feels like.

Marcel The Shell is on its third episode, and we haven't gotten a new one since November 2011, long before co-creator Jenny Slate — who created our beautiful Marcel with husband Dean Fleischer-Camp, who directs it — stole our hearts and the allegiance of our ovaries with Obvious Child. My ovaries thank her for that gift, and for this one.

So how's Marcel doing after all this time? Alright, though he's a little bummed to be locked out. Left out in the cold with a grape. But he's got good news, too: His book, co-written by Slate and Fleisher-Camp and titled The Most Surprised I've Ever Been , comes out November 1. The description is about as overwhelmingly adorable as you'd expect:

One thing about a new day–you really never know where it will go, even if you know where it starts.Marcel the Shell with Shoes On is walking on the blanket when he is unexpectedly launched high into the air. Tumbling through space, the bird’s-eye view offers our small friend not only a glimpse of the important things in life–his beloved Nana who sleeps in a fancy French bread, a stinky shoe, and a monstrous baby–but also a much bigger picture. Sometimes the most wonderful discoveries are the ones we least expect.

Here is the newest Marcel:

And in case you want to catch up or were initially deprived, here are the first two episodes:

"Wanna know what I wear for a hat? A lentil."