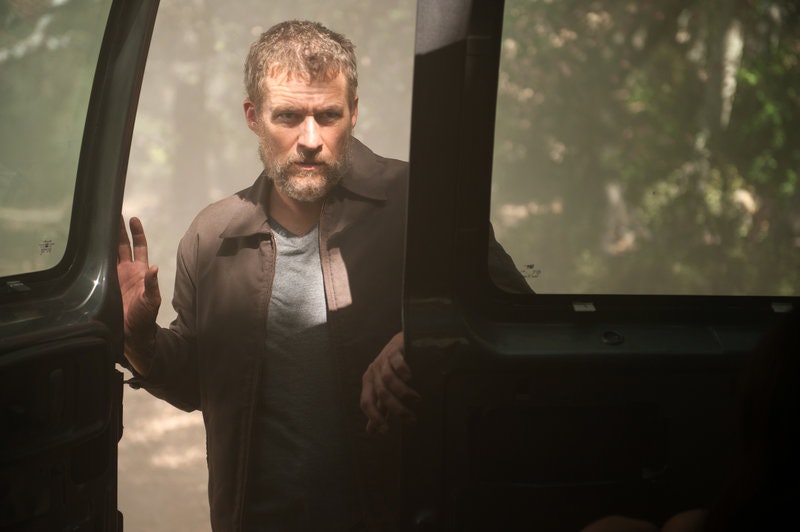 This season of the soap opera — and primetime hit — Revenge looks a lot different than previous seasons. First, there is no Aiden (tear). Second, there is David Clarke, the father of Emily, who we presumed to be dead the entire first three seasons (and why wouldn't we... we we're told he was dead!). But alas, David Clarke is back and more alive than ever, just trying to regain normalcy (if that word exists in the Revenge world) with his surviving family. But could David Clarke die on Revenge already — he looks like he's about to be off'ed on Sunday's new episode by an oncoming car, per the promo.

It wouldn't be the first time someone's death came suddenly. Aiden was killed out of nowhere last season by Victoria. And Takeda? That was seriously out of left field. So it wouldn't be too shocking if David had another death. And since we are used to him being dead, it would be like no harm no foul, right? Look, I am glad that Revenge is introducing new — is he technically new, though? — characters into the show to spice things up a bit, but David has just not really been selling me on his return.

First, he is a totally psycho, we can all agree on that, right? The chain whipping that happened in the fourth episode? I get that it was to really sell his story about Conrad keeping him captive, but still! Also, he was just too quick to return back to Victoria. I might be overly skeptical of people, but I don't think it is too much to say that he should have proceeded with a little more caution before trying to attack a person Victoria says is evil (aka his daughter — did he not think to Google "Emily Thorne" before breaking into her house?).

In the upcoming preview of the fifth episode "Repercussions," it looks like David is about to get hit by a car and, let's just say it, die. But, I don't think we need to worry about David Clarke going anywhere just yet. James Tupper, the actor who plays Papa Clarke is credited in future episodes past Sunday's "Repercussions" which could mean he is there in flashbacks, technically, but that seems too easy. Also, before the season even began, James Tupper was made a series regular, so it would be surprising if he was out of the show that early on, even for Revenge.

So what does this mean for Family Clarke? What will happen for the family that has at some point or another, attempted murder against one of the other family members? Well, with David sticking around, we can be guaranteed things are about to get messy — something I've been waiting for since the first episode. Hopefully we start getting some real interaction between the characters, so we can move this David Clarke return forward.