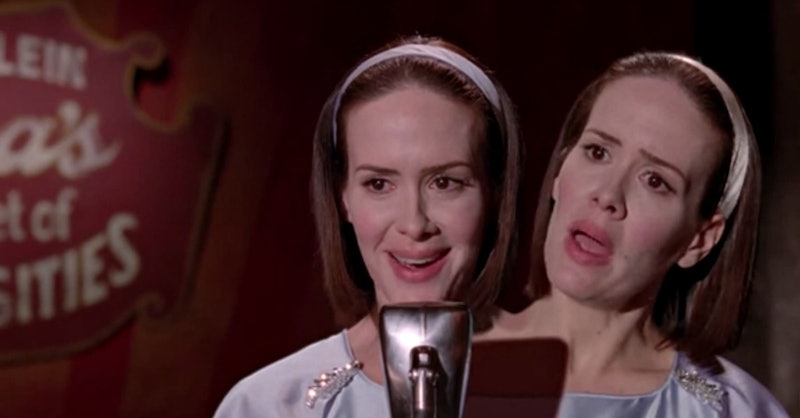 There's trouble brewing on American Horror Story, and it could lead to death for conjoined twin Bette. In Wednesday's episode of American Horror Story: Freak Show, titled "Edward Mordrake Part I," we got a glimpse inside Bette's twin sister Dot's head — and what we saw was pretty damn disturbing. Dot was having a "glorious dream" in which Bette & Dot were about to be surgically separated on the operating table. But separating from her twin wasn't the scary part of the dream — in Dot's dream, Bette would die so that Dot could live and go on to become a performer. Dot screams and cries while Bette just smiles, perfectly content to live out her days not only no longer attached to her sister, but without having a sister at all.

Dot sending her sister off to die so that Dot can live better is a very scary thought (especially for Bette, who seems to be able to tap into her sister's head and see images of her own demise — eep!) but Dot may not want to jump on the operating table just yet. For whatever reason, Dot assumes that Bette will be the one who dies in the surgery, but there's no way that's a guarantee. In fact, all signs point to the idea that separating Dot and Bette could be very dangerous for both of them. Here's why.

The first episode of American Horror Story: Freak Show makes it clear that Bette and Dot are connected by their reproductive system. Dot mentions in her dream sequence that she wants to separate from Bette so she can get married and have children. Even if the surgery is a success, it's highly doubtful that Dot would be able to get her full wish — separating the reproductive system that's attached to Bette's would most likely make her infertile, assuming that attempting to separate the reproductive organs doesn't end in both Bette and Dot's death.

Their Body Parts Are Worth Money

What Dot doesn't know yet about a potential separation surgery is how much money her body is worth. We already know that con artists Stanley and Maggie (or Miss "Esmerelda") want to kill Bette and Dot so they can sell their conjoined body to the Cabinet of Curiosities. Considering how desperate Dot is for the surgery — and how manipulative Stanley and Maggie are — it would be easy for Stanley and Maggie to trick the twins into a low-cost "separation surgery." Stanley could lie and say that the twins died on the table when, in reality, he murdered them and sold off their body parts.

At least, at this point in history they do. According to the U.S. National Library of Medicine, the first successful separation of conjoined twins in the United States took place in 1956. The current season takes place in 1952, a few years shy of the successful operation. The American Horror Story writers have been known to tweak history, but considering that at this point in time the surgery has never been done without death, it's unlikely that both Bette and Dot will survive it. Of course, the awful truth is that Dot doesn't care whether Bette survives or not — and I wouldn't be surprised if a little ironic twist made Bette the one who survived this operation instead.