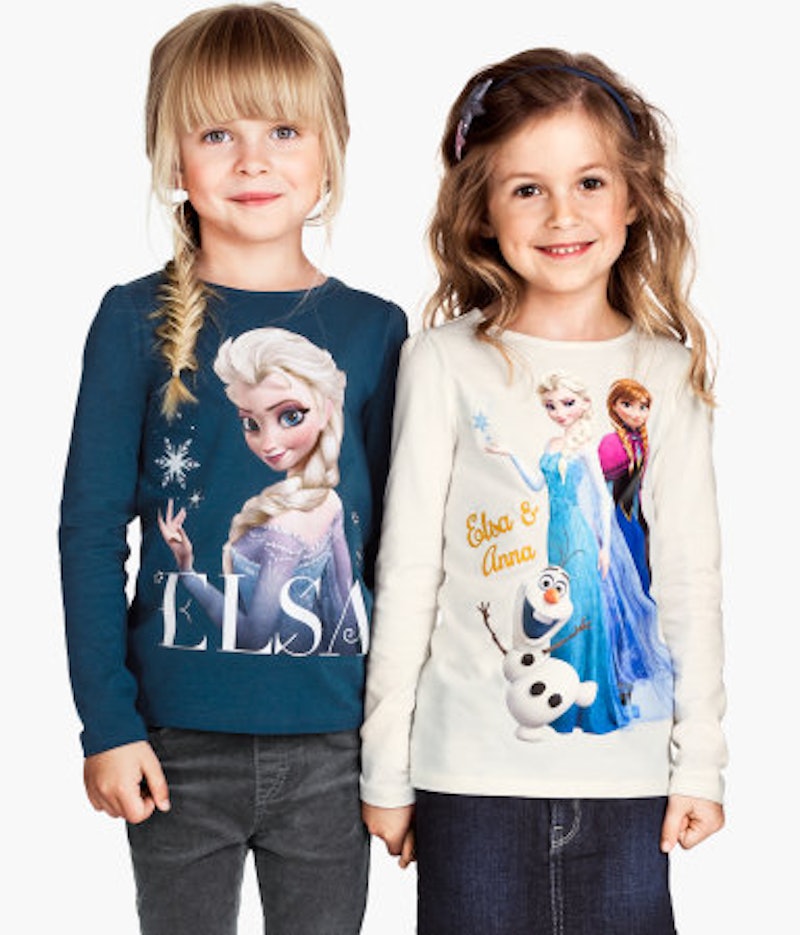 Here's a sentence I thought I'd never write: Frozen-themed clothing items are stirring up some controversy (and no, we're not talking about those sexy Halloween costumes). Parents are angry about two Frozen sweatshirts currently being sold at H&M because Elsa's hand gesture could be perceived as offensive.

According to the Daily Mail, Elsa appears to be flashing a "V-sign" (kind of the UK equivalent of the middle finger) on one of the tops sold in a two-pack for $17.95 on the H&M website. Parents believe the design encourages swearing in children and are asking for the Swedish retail to pull the item.

Jacqui Williams, a 40-year-old mother of two from Warwick, told Mail: "I waited ages to get my hands on an Elsa top for my daughter Daisy but when she put it on I was shocked. From almost every angle you look at the t-shirt, Elsa is doing a V-sign. I'm sure it wasn't intentional but it is unfortunate." Other parents expressed concern that their children would begin copying the pose, possibly at school in front of classmates and teachers.

Honestly, this seems like a bit of a stretch to me. In both shirts, Elsa is holding out her hand with her trademark snowflake hovering above her palm. As an H&M rep said in a statement to Mail, "Clearly the character is holding her hand in that way in order to create a sparkly snowflake," something she does throughout the film as well. It's a pretty signature Elsa pose, which is probably why kids might be interested in copying it.

These tops are basically innocent as can be. I know that parental concern is a powerful beast, one that I can't begin to understand since I don't have kids, but this seems like unnecessary hysteria. If parents aren't cool with these designs, they shouldn't let their children wear the shirts. But there's no need, in my opinion, for H&M to stop selling them.