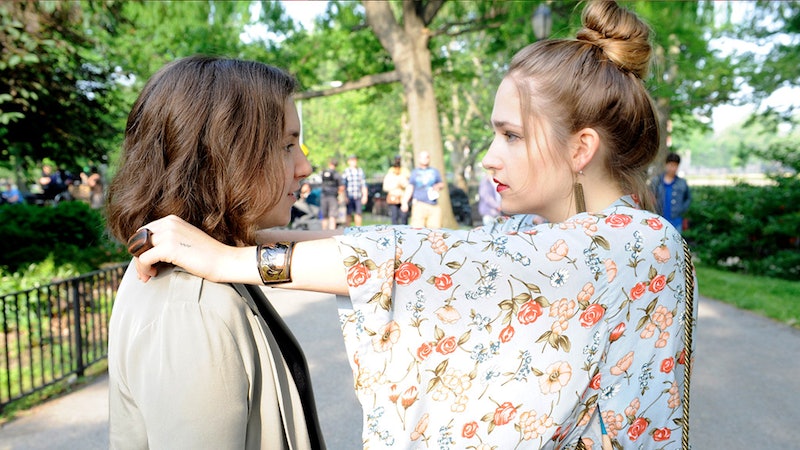 Contrary to what people might believe, not all women who enjoy sex are sitting around at brunch making puns about their labia. Somehow, even in this enlightened age of Nicki Minaj's "Anaconda", people still insist on treating "promiscuous" women differently (it's like throwing a hotdog down a hallway, amirite?). But here's the thing (which hopefully shouldn't come as a shock to you, but if it does, you might want to sit down for the rest of the article): women who openly enjoy sex are actual whole human beings. They are people with lives, feelings, jobs, families, hopes and dreams. People who like cheese or don't like cheese, who are vegan, who drink wine, who go for runs, who do charity work, who bitch about their friends, who watch New Girl, who talk about the weather, who read the news. They are people who are defined by a hell of a lot more than their sexual activity – which isn't usually how they're treated.

That's why it can be entirely frustrating, as a sexual woman, to have to listen to people's shit, and be treated like some kind of classroom science experiment. Get over it: slutty, sexually liberated, promiscuous, easy – whatever you want to label them, these women exist and they fucking LOVE their own existence. They are not anomalous or evil or morally questionable. Or maybe they are, but that determination can't be made on the basis of their sexual conduct alone. They are just as likely to be awesome people of high integrity, or as likely to be super shitty, as anyone else. Their sexuality does not condemn them nor does it absolve them. It is just a part of them. They are not like this or that, they just are. Maybe they want to talk about their sex lives and maybe they don't. Maybe they've slept with 10 more guys than you have or maybe it's 100 more. Maybe they like doing freaky things in the bedroom or maybe they just like it missionary. The only for sure thing about women who openly enjoy sex is that they're sick of hearing other peoples' uninformed opinions.

Oh yeah? Well then don't. And while you're at it, don't even mention it. Saying things like this is a tacit way of acknowledging what you believe to be your moral high ground. Consider maybe that there are people who couldn't do what YOU do. We all have our desires, and passive aggressively calling out the difference between your angelic (frigid?) self and your promiscuous friend is never going to be read as a compliment. By saying stuff like this you're basically calling someone a slut without actually saying the word slut, and backhanded slut-shaming is just as reductive as straight up slut-shaming.

People always seem to be incredulous when a sexual woman is emotionally hurt by the person she was sleeping with. Because, you know, women who enjoy sex purely on a physical level must be emotional witch monsters who eat men's souls. Rejection hurts for everyone whether sex means nothing to you or whether it means everything. When someone you're intimate with is shitty to you, it stings regardless of how many notches you have on your bed post.

No, you are not just like a guy. You are just like a woman, or just like the person you are, and you happen to enjoy having sex. And enjoyment of sex is NOT the sole purview of men. This is a nasty perception that largely still exists, even subconsciously, in our approach to female sexuality. We sincerely need to stop equating shameless horniness with masculinity. Women have hormones too, and are liable to seek sexual satisfaction in equal measure to men.

*SCREAMS INSIDE OWN HEAD FOREVER*

More like this
7 Women Share Their Best Orgasm Stories
By Lexi Inks
Hinge's New NFAQ Feature Is Demystifying Queer Dating
By Emma Carey
The Best Time To Date After A Breakup, According To Experts
By Bustle Editors
Beyoncé & Madonna’s “Break My Soul” Remix Honors A Group Of Black Icons
By Stephanie Topacio Long
Get Even More From Bustle — Sign Up For The Newsletter