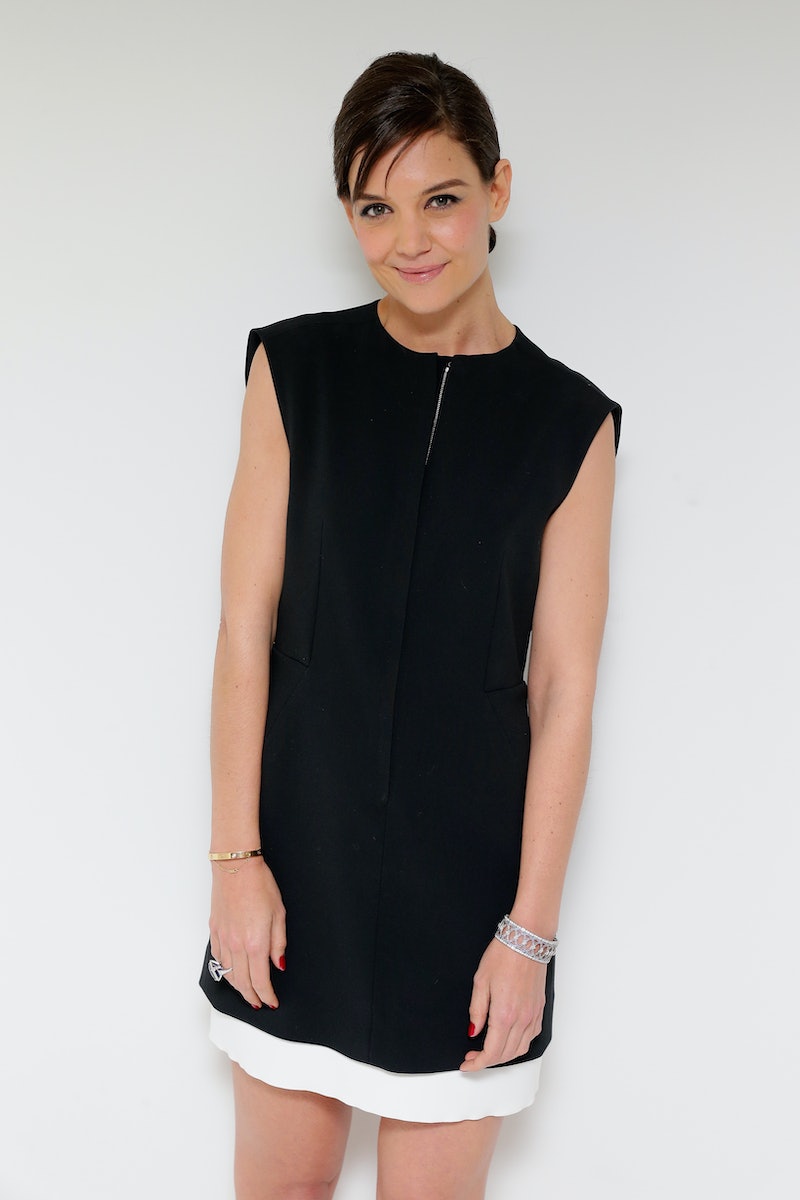 Though it seems like far longer ago, Katie Holmes and Tom Cruise divorced two years ago. It's time for everyone to move on. During their relationship and after their divorce, headlines have still focused on Holmes and her TomKat days, whether it's about their daughter, Suri, or drama about her love life. And now, two years after they officially split, Holmes told People what I've been thinking for years: "I don't want that moment in my life to define me, to be who I am. I don't want that to be what I'm known as. I was an actor before, an actor during and an actor now." Yes, everyone. Holmes is an actor, first and foremost, and a great one at that. From her early days on Dawson's Creek to her impressive dramatic acting in Pieces of April to playing Jackie Kennedy, her resume is nothing to scoff at. Even her stint on How I Met Your Mother as the Slutty Pumpkin and her most recent small role in The Giver were fantastic, and she deserves some credit.

I have a brilliant idea: let's all remember Holmes for her acting, not for who she's dated. To help jog your memory, here are six of Holmes' best roles to re-live while she (hopefully) restarts her career and gets back on our screens more. And, yes, First Daughter holds a special place in my heart, but I had to draw the line somewhere.

Sure, it was an angsty teen drama, but it was one that set the bar high for series to follow. As Joey Potter, Holmes delivered many incredible scenes and monologues, from the first episode to the very last. Here's a classic Joey/Pacey emotional scene from Season 3. Also of note is Teaching Mrs. Tingle, also from Dawson's creator Kevin Williamson, which was her first starring movie role.

This was one of Holmes' first films released after Dawson's Creek ended, and the indie dramedy about April (Holmes) trying to reunite her dysfunctional family for Thanksgiving dinner has a lot of heart. It's a great mix of comedy and drama, and definitely showed her range after playing Joey for so many years.

Thank You For Smoking

Though Holmes' role wasn't huge in this movie, she had some memorable scenes and great chemistry with Aaron Eckhart. As a journalist using seduction while plotting quite a takedown with the secrets she learned, she definitely turns the tables in this Jason Reitman movie.

I think that one of Holmes' worst career decisions was not coming back for The Dark Knight. She was great as Rachel Dawes in Batman Begins, and though I like Maggie Gyllenhaal, the actresses don't look alike and Holmes was a better fit with Christian Bale.

Not only does Holmes look the part of Jackie Kennedy, but she played it perfectly in the 2011 miniseries. In fact, she will reprise her role in the upcoming follow-up miniseries The Kennedys: After Camelot.

Holmes had an important role in The Giver as lead character Jonas' mother. Because of the way the community works in the book-turned-movie, her role had to be played very straight, without feelings or emotions. She managed to somehow make this relatable to viewers, and I was impressed.