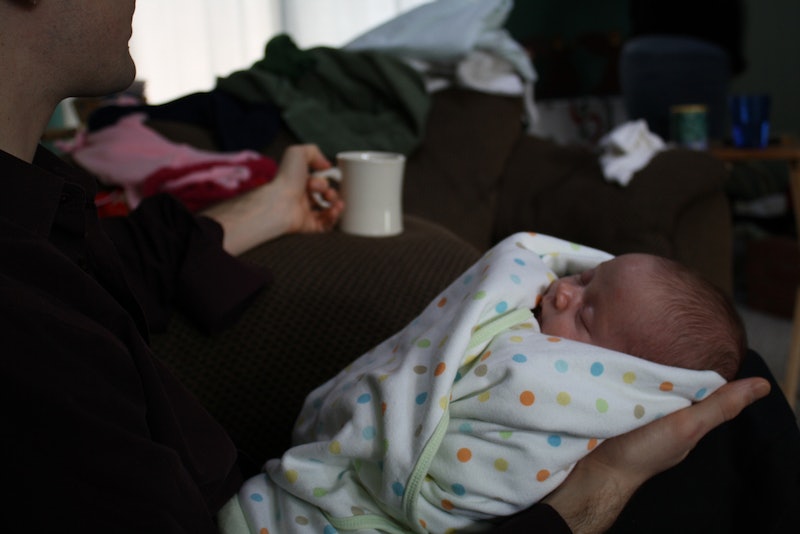 Shrage clarifies this does not mean newly-divorced dads can pack their bags, throw up their hands, and shout “I’m outtie!” to children they have already committed to raising. Rather, she is referring to a very specific scenario wherein a man who never consented to having a child is “coerced” into paying child support because his partner decides she wants to keep the baby—no matter what he thinks.

I agree with Shrage. I agree it's unfair to require a man to have anything more to do with a child when he's made it clear he doesn’t want to be a father, and his partner, in full knowledge of this, has decided to do the motherhood thing by herself. I agree, that is, within the context of an ideal world, where Shrage lays the groundwork for her argument: a feminist fairyland where women actually have full reproductive autonomy.

But that world doesn’t exist.

Standing in the way of women’s reproductive freedom, in this country alone, off the top of my head?

Pressure from family to carry an unwanted pregnancy to term, pressure from a spouse, pressure from an abusive spouse, lack of knowledge about or physical access to a clinic, being turned away from said clinic, living in Wisconsin and not having the extra couple hundred to pay for a pre-abortion ultrasound at the clinic.

But lets stay in Shrage’s fantasyland a little longer. I like it there. Women’s reproductive autonomy is like an ice cream shop—so many choices! And what do men have in comparison; “If a man accidentally conceives a child with a woman, and does not want to raise the child with her, what are his choices?” asks Shrage. Well, she lists them for us herself. He can try to convince his partner to have an abortion. If he fails, his partner or the government then has to legally establish him as the father— but how easy is this in practice, and how likely, if a man is trying his darndest to avoid it? Finally, if his biological link to a fetus is confirmed against his will, then yes, a man becomes a forced father, aka, he must pay child support.

And then he can literally have no other involvement.

Yes, paying child support after having a baby you didn’t want sucks, especially for Dads just struggling to get by. But comparing forced fatherhood to forced motherhood is like comparing apples and rambutan, because the later involves not only money but time, responsibility, and labor (in both senses of the word). A man paying child support retains many of the life options he had pre-fatherhood. Not so for a forced mother.

Continuing our journey through Shrage’s ideal world, she suggests we solve the problem of forced fatherhood by deemphasizing ties via blood, while pursuing greater legal acknowledgement of men who are fathers because of their nurturing role in a child’s life. I’m all for broadening our cultural definition of who constitutes a parent, but what if this second father figure doesn’t exist for a mother who has been forced to carry a child to term? Child support is necessary, and frankly, a good deal for an unwilling dad compared to an unwilling mom.

I want to know the expiration date of Shrage’s “get out of fatherhood free” card, that is, how long do we give a potential father to express his dissent? Obviously we can’t expect him to yell “No thanks!” at the moment of conception. But what if he’s initially down to be a daddy, but changes his mind in the third trimester? By Shrage’s rules, such a man would be a “forced father” and should get off the hook.

My favorite part of Shrage’s article is when she asks (the very meme worthy) question: “Do our policies now aim to punish and shame men for their sexual promiscuity?” There is really only one way to answer that, and it involves typing “hahaha” repeatedly, for an entire page, in all capital letters.

To me, the latter half of Shrage’s article comes of a little woman blame-y. I say this because she continually emphasizes how seeking child support causes discord in the life of a child when his or her absent father is forced to show up and pay up at court. She seems to hint that women should not force a man to be a father (in the financial sense of the word) because the resulting acrimony is bad for their children. I’m sure these “coercive” women agree, and if they were well off enough to forgo the violence and threats Shrage herself says are often leveled at them by unwilling legal fathers, they would. Such violence is not caused by child support, or the mothers who seek it. It is caused by violent men, because they are violent. Period.

So to answer Shrage when she asks, “Do men now have less reproductive autonomy than women? Should men have more control over when and how they become parents?”: Neither men nor women have absolute reproductive control. Sex still has difficult repercussions for both. But men will always have more reproductive freedom in a society where fatherhood can be defined solely by direct deposit to a checking account.

But tell me, Shrage, where is this mythical world of yours, because in the words of Liz Lemon, "I want to go to there."

More like this
The Rarest Baby Names In The U.S., According To The Most Recent Data
By Mia Mercado and Emma Carey
Yomi Adegoke On The Offline Diaries & The Power Of Representation
By Jessica Morgan
How To Fight For Reproductive Rights, Based On How Much Time You Have
By Courtney Young
The Most Compatible Life Path Numbers, According To Numerologists
By Kristine Fellizar
Get Even More From Bustle — Sign Up For The Newsletter