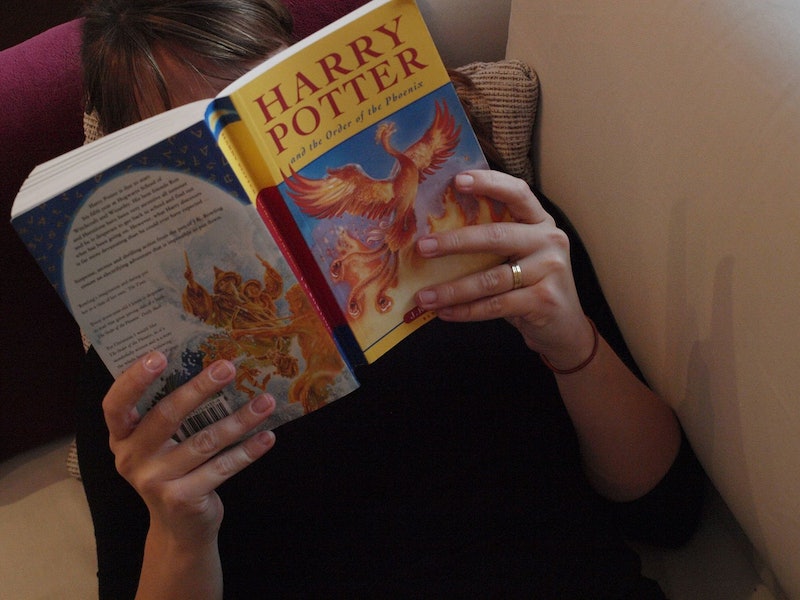 Ever had that experience reading a novel when you become so absorbed that you forget to each lunch or you miss your subway stop? Or you're turning the pages so fast when you look up the house has gotten dark around you, and you realize you've been squinting to see the words. You probably call it "getting lost in a book," and we could all probably name a novel that has caused this to happen. No surprises here, but many people mention J.K. Rowling's Harry Potter series as making them victims of this absorption.

For the first time, bookish neurologists have looked into what causes people to get lost in a book, and they've used Harry Potter books as research. A team of researchers and scientists lead by psychologist Chun-Ting Hsu at Free University of Berlin in Germany studied brain reactions to particular passages in the Harry Potter books to see if certain types of excerpts facilitated the immersive experience.

The result was the "fiction feeling hypothesis," which the research team describes as:

According to the fiction feeling hypothesis, narratives with emotional contents invite readers more to be empathic with the protagonists and thus engage the affective empathy network of the brain, the anterior insula and mid-cingulate cortex, than do stories with neutral contents.

For us non-scientists, it essentially means emotionally charged book passages → empathy with the book characters → brain engagement → getting lost in a book.

OK, so the key to unlocking the immersive reading experience is point A: emotionally charged book passages. What do these entail? First of all, the scientists studied four-line passages from Harry Potter — some were neutral, as in exposition, and others were fear-inducing.

One guess as to which of the two causes more people to get lost in a book... you're right. It's the latter.

Take for example, two passages from Harry Potter and the Prisoner of Azkaban. The study didn't disclose which excerpts were used, but it's not hard to imagine what they were like.

Harry Potter was a highly unusual boy in many ways. For one thing, he hated the summer holidays more than any other time of the year. For another, he really wanted to do his homework but was forced to do it in secret, in the dead of night. And he also happened to be a wizard.

And then there's passage No. 2:

Harry's eyes darted downward, and what he saw made his stomach contract. There was a hand protruding from the cloak and it was glistening, grayish, slimy-looking, and scabbed, like something dead that had decayed in water...But it was visible only for a split second. As though the creature beneath the cloak sensed Harry's gaze, the hand was suddenly withdrawn into the folds of its black cloak.

Even Muggles know that Dementors are terrifying, so yes, the second passage, in this theory, is the kind of writing that will cause you to miss your subway stop.

And not only that, but the latter passage also triggers completely different neural pathways than the former, leading much more clearly to the empathy portions of your brain.

So what does this mean? Well no, it can't yet tell us how to make an entire book immersive, because if there isn't any exposition at all we'd be all so confused about the book's plot that it would be hard to get lost in it. But it does showcase how books not only teach empathy, but the types of writing that can boost empathy even more.

This should come as no surprise to anyone who has ever read The Fault in Our Stars, that reading fear-inducing text — and yes, fear doesn't have to be scary monsters, but it can be existential, too — can make you cry and feel empathy.

But it's these kinds of studies that can only enhance people understanding the importance of reading, particularly among children as their brains age and advance. And it's a positive first step toward researching reading and emotion, showing that no, we book nerds aren't crazy — maybe we're just addicted.