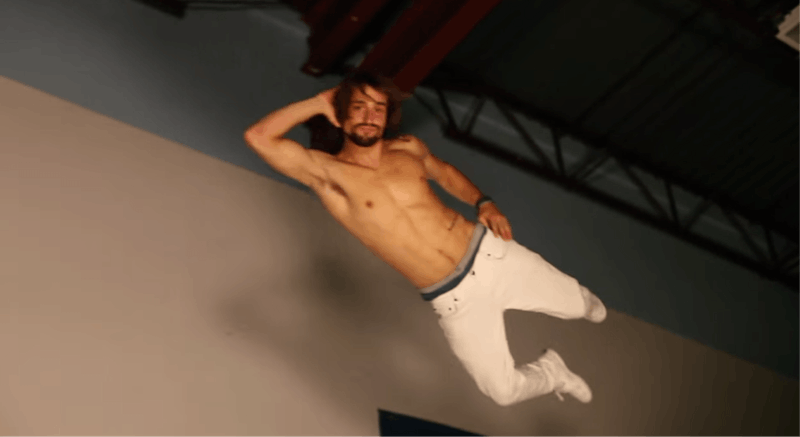 Everyday I am reminded that there are human beings in existence who not only exercise for "fun," but actively enjoy excruciating activities that push their bodies to the very limits of sanity. And while most of these people scare me, I have to say that I'm a pretty big fan of Jake Murray's American Ninja Warrior video submission. This man can do things that I only have ever seen on TV shows about fictional superheroes. Like, he looks pretty normal in the first five seconds, but after some crazy lifting and jumping shenanigans you can tell this guy is jacked.

The inspiration for this both hilarious and impressive video came from what sounds to me like a total nightmare: Murray spent five days waiting to see if he could run the American Ninja Warrior course last May. I didn't even realize that that was a thing that people did. All these singers I know who complained about waiting for American Idol auditions for two days now seem like total chumps. And you can see the agony Murray endured in the comical way he channels it in this video, a nod to the ridiculous dancing scene in the greatest movie of all time, Hot Rod , wherein Murray dramatically drinks Gatorade and randomly busts some impressive moves. It's an emotional rollercoaster all the way to the end.

As much as I will never understand this kind of insanity, I am behind this guy 100% in his attempt to get on this show. Hopefully, now that his video is starting to catch the attention of the Almighty Internet, it will fall into the right hands. This clearly took a lot of effort and he got so many of his friends involved, so that should come to something. And it's the ultimate underdog story! I can't imagine how the show could pass him up. Also his hair is six kinds of ridiculous and I'm obsessed with it almost as much as I'm obsessed with his mad skateboarding skillz. Check him out: