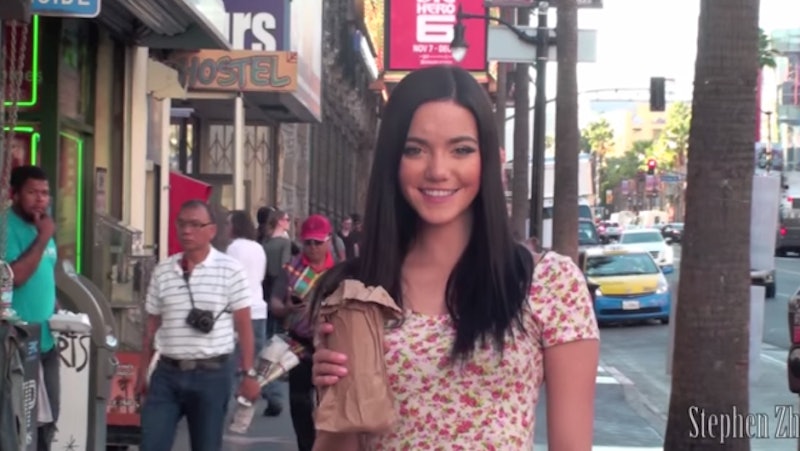 On Tuesday, a truly disturbing video of a drunk girl on Hollywood Boulevard hit the Internet. Jennifer Box, the actress in the video, stumbled around the infamously seedy strip pretending to be wasted while a hidden camera captured lots of lecherous dudes trying to take advantage of her instead of directing her to the bus home. It turns out the video was staged.

I spend all day on the Internet and, as such, I encounter some pretty creepy/weird/ridiculous stuff. But I found this video to be especially unsettling — more so than the Hollaback! catcalling video, moreso than Redfoo's "Literally I Can't" music video, moreso than pickup artist Julien Blanc's predatory seminars. I felt like I was watching a bunch of men basically preparing to commit rape, as they were trying their damnedest to get this woman in their beds when she was clearly too intoxicated to consent. So when word broke today that the video is probably a hoax, I was relieved. But also a little pissed off. Women already live in fear of sexual assault — do we really need to be subjected to a fearmongering video that makes it seem like leaving your house drunk is tantamount to inviting rapists to take advantage of you? I definitely felt a little less safe in the world after watching that video.

And what of the guys in the video, who were approached beforehand and asked to be in a "comedic hidden camera video" that they apparently thought was part of a student film? The were duped into playing the part of would-be rapist, as guided by producers, and now their faces are plastered all over the Internet without a "THIS IS FAKE" disclaimer to go along with it.

There's enough messed up business going on in this world as it pertains to sexual assault. We don't need to invent stuff.

More like this
Here’s What Sarah Jessica Parker’s Canned Cosmo *Actually* Tastes Like
By Emma Garza
What Does “Gatekeeping” Mean On TikTok? The Viral Term, Explained.
By Courtney Young
TikToker Kate Glavan Has The Antidote To The “Hot Girl Walk”
By Alexis Morillo
What Is “Night Luxe?” Breaking Down TikTok’s New Aesthetic
By Courtney Young
Get Even More From Bustle — Sign Up For The Newsletter