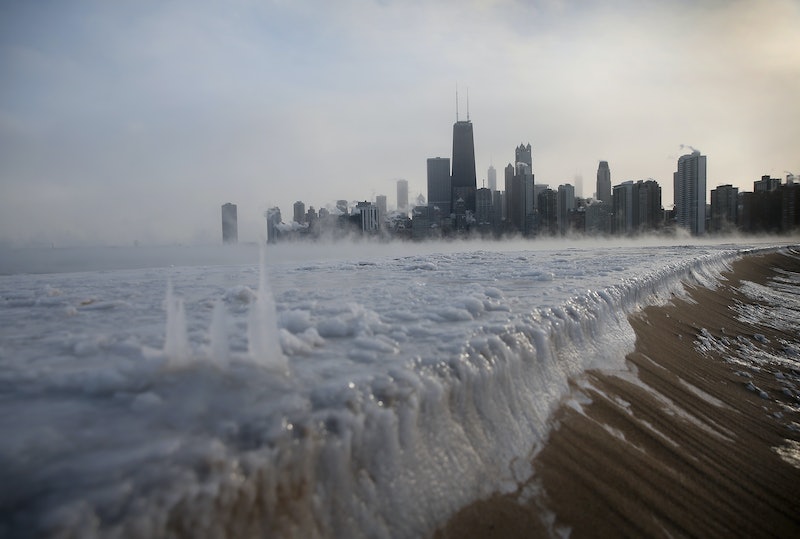 If you thought we were still happily situated in the middle of a beautiful, golden autumn, guess again. CNN reported yesterday that a blast of cold air has launched us into an early winter with some parts of the United States already beginning to experience first snowfalls and temperatures in the negatives. Though the weather might ease up a little bit over the weekend, another blast is forecasted to hit the same states again next week, including Kansas, Colorado, Texas, Alabama, and Minnesota.

This is pretty disconcerting news, seeing as the first official day of winter isn't until December 21st, over a month from now. Isn't autumn supposed to be the sacred time of year that facilitates an easy transition between two very different seasons? A three month time period to indulge in crisp air, pumpkin delicacies, denim jackets lined with fur, and romantic sunsets? A way to celebrate the remnants of life given to us in spring before the cruel, harsh winter takes it away from us?

Winter is where leaves, plants, sunshine, car engines, crop tops, picnics, good circulation, hopes, and dreams all go to die as a profound loneliness descends upon us to remind of us our mortality.

In Greek mythology, Hades the God of the underworld kidnapped Zeus' daughter Persephone to be his wife, and in the six months that Persephone's gone, her mother Demeter got depressed and caused the winter. Even if Greek mythology isn't your jam, you have to admit that the fact that it gets dark by 5:00 p.m. every day with no starlight or moonlight to remind you that there's more out there beyond this resource-depleted orb we call home can really bring your spirits down.

3. It's Prime Season for the Cold and Flu

According to the CDC, flu activity starts peaking around December and can continue as late as May. This means that you have to put on pounds of clothing, leave your apartment (which is probably heated so much you're mildly dehydrated), walk to the nearest drug store as unbearably cold air hits your already-chafing nose just to get a box of tissues and some fever reducer that probably won't do much anyway, all because it's winter.

4. You Only Ever Feel One Type of Way: Cold

You wake up cold, go outside cold, come inside cold, snuggle while you're cold, and go to sleep cold. Even if you warm up for a second, your body will lose that heat and you'll be cold again. When the air is too chilly outside, it even feels like your lungs get colder as you inhale the air and all your extremities start to lose sensation. How can it possibly be cuddle weather IF I CANT FEEL MY FACE.

Say goodbye to bare legs and sun-kissed arms and free-flowing hair and showing off your bellybutton piercings and say hello to people telling you "Hey! you can't wear a skirt in December!" How can I be expected to accessorize and show off my sense of style and devotion to the new jelly choker trend coming back if my neck is completely covered with a giant, bulky piece of cloth and the rest of me is weighed down by the same heavy jackets everyday? Even makeup becomes an ordeal because you never know at what moment a heavy gust of air could hit you so hard your eyes water, or the snow that is being blown directly into your face will melt and drag down streaks of mascara with it.

If you think snow is a beautiful, twinkly, magical gift from the clouds that graces this earth with a white sheet of fluff, happiness, and hot chocolate in American homes, think again. When the novelty wears off, snow turns into tar-black slush with the dirt from our shoes and cars, commutes get delayed indefinitely, car accident rates increase, icicles start to melt and fall on unsuspecting heads, and cities that are unprepared can completely shut down for lack of public transportation or street-cleaning vehicles. Even cities that are prepared can't always be equipped to deal with blizzards, black ice, and visibility.

7. It's Harder to Explore

When the weather is too cold or too gross, it's impossible to motivate yourself to go somewhere new or find fun activities. Everything outdoors is closed or off limits. Everything indoors, like coffee shops, museums, and movies theaters, provides only temporary relief until you have to go back out into the bitter cold again. Even leaving your house for groceries doesn't seem worth it when it will take you longer to dress and undress than it will for you to get somewhere and shop.

8. There's Not Much to Look Forward to When Christmas Ends

It could be argued that the best part of winter is Christmas and the build-up around it, but when that's over you still have three months of cold to look forward to, but this time without Taylor Swift and Justin Beiber's Christmas covers and trendy peppermint flavored drinks.

9. It's the Loneliest time of the Year

People tend to stay indoors and socialize less in public places during the winter. There is no rapid heartbeat fueled by heat and energy that makes cities run during other seasons. The cold and darkness can help us seek solace in other people and participate in mass "cuddle sessions," but only when other people can make it out to where you live, which sometimes doesn't happen because of the sheer coldness. But hey, on the bright side, at least you can sit in your apartment, watch Gossip Girl re-runs and drink wine until the misery is over.