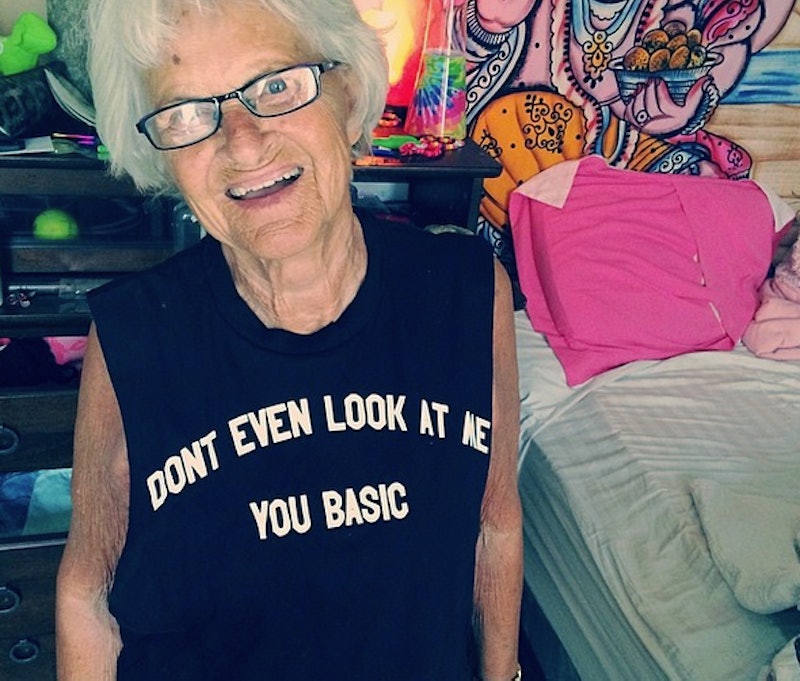 Meet the most hardcore grandma around. Baddie Winkle, an 86-year-old great-grandmother, is social media's newest fashion icon. And she's quite appropriately named — I mean, she is seriously badass.

The Eastern Kentucky native has gathered over 400,000 Instagram followers and 250,000 Twitter followers through posting pictures and videos of herself wearing variations on some pretty kickass clothing, for example, flower tanks with "Twerk" on the front, and a tie-dye shirt emblazoned "Will Commit Sins 4 Chipotle". She is one legit grandma.

Baddie's had some help from her great-granddaughter, and what started out as just fooling around led to the inspiration to show the world that age is only a number, and it's never too late to become a social media star.

"Even in my old age, I've never really done anything noteworthy until now. I would love to get other old people active instead of just sitting around all day doing nothing, acting like life is over," she told Paper Magazine.

Her Instagram feed reads like an amalgamation of endearing, a reflection on society, and a whole load of carefree fun. Plus it made me feel like even more of a nerd than I already did. Baddie is one tough chick.