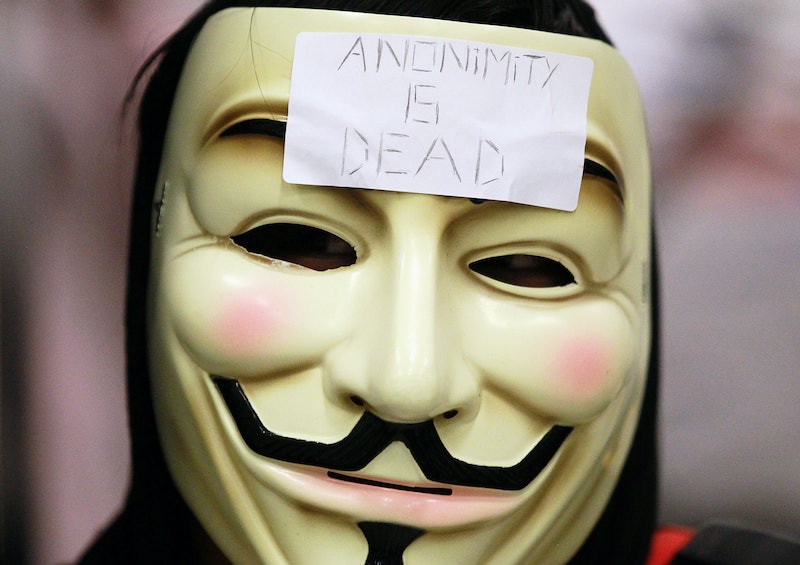 Ever had your email or Twitter account hacked? It sucks to know somebody's trying to breach your security, especially when you've done nothing to deserve it. But what if you had done something to deserve it, in a sense — what if you were a member of America's most infamously racist hate group, and you ran afoul of a collection of high-powered internet hackers. Well, that's exactly what's happened to the Ku Klux Klan late Sunday: members of Anonymous hacked the KKK's Twitter account, after the hate group threatened violent action in the aftermath of the Darren Wilson grand jury decision, which is widely anticipated to be announced soon.

It all started when Anonymous launched their so-called #OpKKK, which aimed to cripple the racist group's online presence through denial-of-service attacks (DDoS), knocking a handful of their affiliated websites offline. Personal information was also made public about the identities of different members of the Klan, through doxxing, leading some furious KKK social media manager (not every social media gig looks good on a resume) to take to Twitter to condemn Anonymous and taunt their efforts.

This, as it turns out, may not have been the best idea — within two hours of their last tweet ribbing Anonymous, the account was taken over, tweeting out an image of a lynched Klansman hanging from a noose.

You might say that the cornerstone of all this anti-KKK action were the threats that they made about what might happen following a theoretical non-indictment of Ferguson police officer Darren Wilson. Citing fears of rape and "D.C. sniper-style shootings" (presumably, in this deranged equation, committed by enraged black protesters), the Klan vowed that lethal force would be used "as provided under Missouri law."

It was this ill-advised rise out of the shadows — maybe they're buying too much of their own hype? — which has put the KKK squarely in Anonymous' crosshairs. It's refreshing, however, to see controversial and intimidating practices like doxxing employed for a cause that actually, truly has relevance and importance, instead of just petty terrorization. There's no excuse to release somebody's personal information — but as far as excuses go, membership in the most reviled hate group in American history is a compelling one, at the very least.

This does, however, demand some level of faith in Anonymous' accuracy, which can be shaky sometimes — when you're outing people in such a public way, there's always major concern whether a completely innocent, uninvolved person might get lumped into the lot.

Of course, whether this is a positive for the people and protesters of Ferguson is kind of an open question. Fair people could argue that the involvement of such a high-profile online hacktivist movement might distract from the core issues at play — police violence, protocols for killings of unarmed civilians, and the value of black people's lives. But there's also a fair case to be made that any chance to undermine and disrupt the Klan is one that ought to be taken.

While the imagery of a lynched Klansman hopefully remains firmly in the realm of satire — however vile a person's politics, such violence is unacceptable — this much seems obvious: if you're living in a community, you's probably want to know if anyone living amongst you is a KKK member. Especially if, as has been seen in some police departments, some of them are members of the local police force.

Anonymous, via the KKK's official account, tweeted that a statement will be coming Monday about its so-called #OpKKK.

More like this
How The City Healed Five Years On From The Manchester Arena Attack
By Ella Glover
What Is “Night Luxe?” Breaking Down TikTok’s New Aesthetic
By Courtney Young
TikTok Is Using A ‘Love Island’ Sound To Expose Their Weird Crushes
By Courtney Young
The Viral TikTok “30,000” Sound Fits Nearly Every Scenario
By Courtney Young
Get Even More From Bustle — Sign Up For The Newsletter