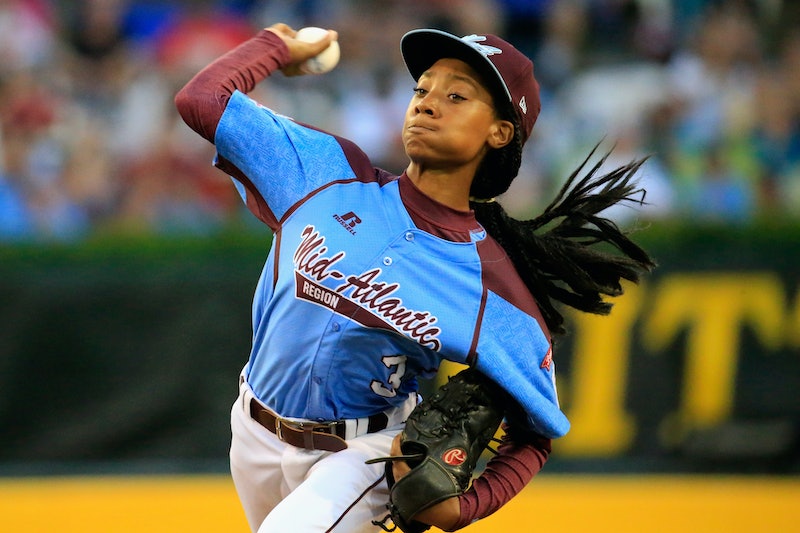 This summer, she became the first female pitcher in Little League history to throw a postseason shutout, and now preteen baseball sensation Mo'Ne Davis is writing a memoir.

She’s only 13, but Davis tosses out a 70 mph fastball, she’s already been on the cover of Sports Illustrated (the headline read “Mo’Ne: Remember Her Name”) and her talent moved ESPN’s Melissa Isaacson to write a piece called Why Mo’Ne Davis’ Play Matters to Girls , in which she talked to other young girls about how Davis has inspired them. “I like how she goes against what everyone says. It’s kind of daring,” said a 13-year-old named Joclin Johnson.

HarperCollins is taking a page from that Sports Illustrated cover — the book will be called Mo’Ne: Remember My Name, and will be out Spring 2015.

“I hope it encourages people to take a chance and play the sports they want to play and not just the ones people expect them to play,” Davis said in a statement. If you’re not a fan of baseball, Davis' book might change your mind. This one has girl power written all over it.

Davis also made a short documentary/Chevy ad with Spike Lee called Throw Like a Girl that starts with Davis declaring in voiceover: "Dear United States of America, I am 13 years old. This summer was the best summer of my young life."

At this point, the kid is becoming a national treasure. A book deal certainly helps, too.

More like this
Selma Blair Wrote Through The Pain
By Samantha Leach
The 20 Best Audiobooks To Fall Asleep To
By Aoife Hanna and K.W. Colyard
Zosia Mamet Opens Up About Her Eating Disorder
By Zosia Mamet
Watch The Emotional Trailer For Dolly Alderton’s 'Everything I Know About Love'
By Bustle UK
Get Even More From Bustle — Sign Up For The Newsletter