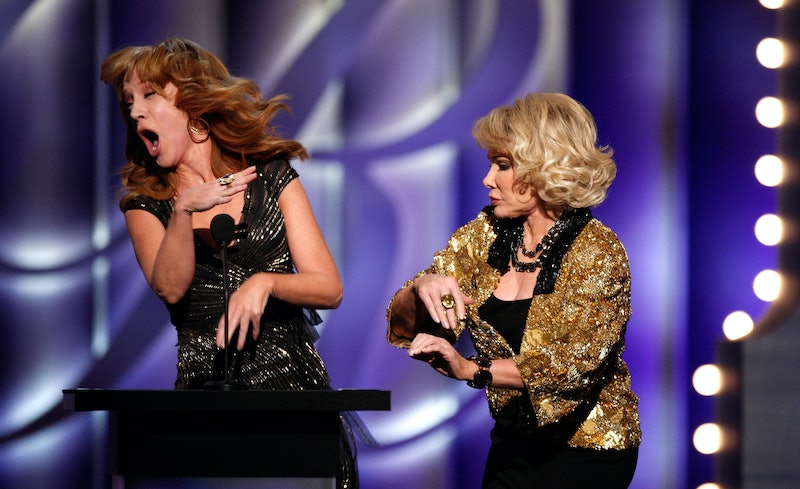 No one can replace the legendary Joan Rivers in the comedy landscape, but it is show business credo that the show must go on. For E!'s Fashion Police that means that Rivers' spot must be filled, and now they've reportedly found said person: Kathy Griffin will step into Rivers' Fashion Police shoes, hopefully charting her own future for the shoe while acknowledging how big the shoes she's filling really are.

It's actually a pretty fitting move: Rivers was a trailblazer for acid-tongued women unafraid of speaking their oft-controversial thoughts on celebrities and current events, and Griffin is one of the most visible comedians to have followed directly in her footsteps.

Griffin admitted last month to being in talks for the E! fashion-based show, but now TMZ's reporting that it's essentially a done deal. According to THR, though, E! won't confirm that talks have come to a conclusion.

TMZ also writes that Fashion Police will no longer be a weekly series," and that "E! will roll it out during awards shows and other occasions as event programming." Griffin, like Rivers before her, is no stranger to controversy, but it'll be interesting to see whether she participates in the body-shaming Jennifer Lawrence called Rivers out for. I would hope not — I for one am a longtime fan of Griffin's, and I hope that this new chapter for Fashion Police would involve leaving behind that tired tradition. We can keep the snark — I doubt ! producers would ever advocate for losing that — but let's leave the arm flab out of it.

Here is Griffin roasting Rivers in 2009:

More like this
Sandra Bullock, Girlboss Extraordinaire
By Matt Harkins & Viviana Olen
Spice Girls’ Net Worth: The Richest Member Is Wealthier Than The Rest Combined
By Hugh McIntyre
Teyana Taylor Channeled Aaliyah In Y2K Thong & Leather Pants
By Dominique Norman
Bustle Newsletter: May 17, 2022
By Stephanie Talmadge
Get Even More From Bustle — Sign Up For The Newsletter