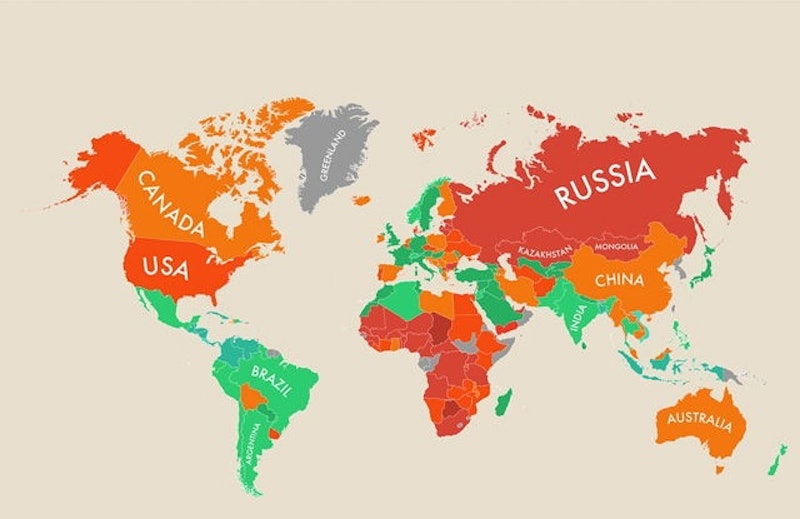 Ever consider packing up and moving to a different country, whether to get away from it all or simply to try something new? If so, you may want to seriously consider Costa Rica as your getaway destination. MoveHub recently used the Happy Planet Index (HPI) to create maps charting the level of contentment in various countries around the world, and according to the data, Costa Rica is officially the happiest country on Earth.

As MoveHub explains, the maps were created using the latest statistics from HPI, a global measure of sustainable well-being that advocates the premise that happiness is not about wealth, but about “living long lives with a high experience of well-being within the environmental limits of the planet." As reflected in the maps, the countries are ranked by their overall index scores, which are factored from three main components: life expectancy, experienced well-being, and ecological footprint.

Of course, it’s important to keep in mind that the ranking doesn’t consider every happiness-related factor. “Internal inequality measures and human rights issues” tied to some of the higher-ranking countries aren’t factored. Meanwhile, some of the world’s high-income nations have low happiness ratings because of their high ecological footprints.

OK, so the ranking may not be definitive, but I think we can all agree that Costa Rica sounds pretty good right about now. As if constant 70-degree weather isn’t appealing enough, the country is significantly ahead of much of the world in terms of producing healthy, happy and environmental-friendly lives. Who else thinks it’s time to start planning a looong vacation there?

More like this
The 3 Best Heated Steering Wheel Covers
By Margeaux Baulch Klein
Grenada Is The Ultimate Caribbean Hotspot For Relaxation & Adventure
By Hannah Orenstein
Ashamed Of Your Screen Time Stats? Here's How To Change That
By Alexis Morillo
How To Turn Off TikTok Profile Views So You Can Stalk Other Accounts In Secret
By Alexis Morillo
Get Even More From Bustle — Sign Up For The Newsletter
From hair trends to relationship advice, our daily newsletter has everything you need to sound like a person who’s on TikTok, even if you aren’t.