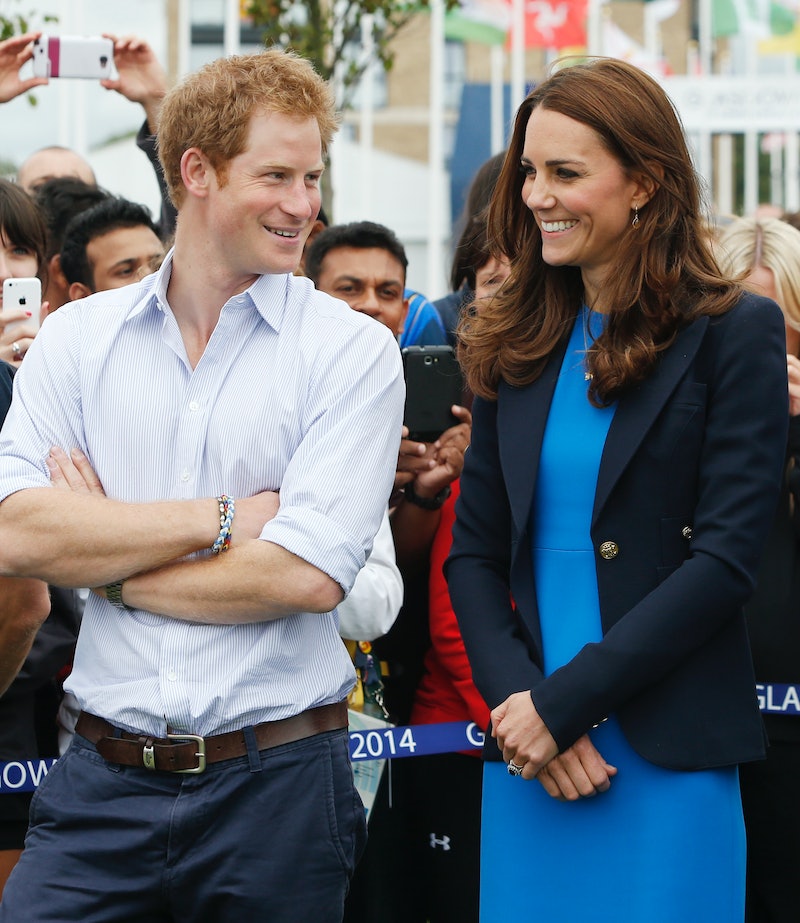 What do you buy the royal who has everything? If it was my job to shop for the fabulous Prince Harry, I wouldn't know where to start, but luckily, it's not my problem. That one is up to Kate Middleton, who's apparently had no issue figuring out what she and Will are giving their little bro when Christmas rolls around next month. Reportedly, Kate's found the perfect gift for Harry: a yellow labrador puppy that Harry will get to pick out from a litter once they're born at the end of this month. And seriously, who doesn't love puppies?

And according to sources close to the royal family, the new puppy is meant to keep Harry company — and after Kate saw how much he adores her spaniel, she couldn't resist. "Kate knows how much Harry loves Lupo, and how much joy he brings him, so it makes sense he should have his own puppy," a Kensington Palace insider says. "Kate and William worry that Harry gets lonely living on his own, so a pet puppy would be a great solution."

As precious as that is, a puppy is one of the least epic gifts Harry's received recently. The palace published a list of gifts Harry received during his tour overseas last year, and I have to admit, I'm pretty jealous.

A flying jacket from Michelle Obama

The first lady presented Harry with a brown leather flying jacket. And not only would Harry look fierce in leather, but everytime someone compliments him on his smooth jacket, he gets to say, "Thanks, Michelle Obama gave it to me. NBD."

A fleece jacket from Chris Christie

A fleece jacket is one of those gifts that's super boring if someone like your mom gives it to you — or, you know, if it came from Lululemon or something. But if it's directly from the governor of New Jersey, that changes things a little. Christie also gave him a book and a bronze commemorative medal.

Swag from the USA Swimming Team

And by swag, I mean basically anything Harry needs to swim like an Olympic champ: a duffle bag, goggles, swim shorts, a swim cap, golf balls, and two key rings.

Whiskey from an Australia Commanding Officer

First of all, alcohol is a great gift. Second of all, it's an especially great gift when it comes from someone like the commanding officer of Australia's Special Air Service Regimen. And it wasn't just whiskey — the commander threw in a flask, some military goggles, sunglasses, a baseball cap, a T-shirt, a tie, and two cup holders.

More like this
Kate Middleton Wore Princess Diana’s Jewels In Royal Portrait
By Meguire Hennes
Lilibet & Prince Charles’ First Meeting Was Emotional, According To Reports
By El Hunt
An 'Emily In Paris' Fave Is Joining Season 5 Of 'The Crown'
By Bustle Editors
Harry Styles' New Gucci Collab Is Serving Woodland Chic
By El Hunt
Get Even More From Bustle — Sign Up For The Newsletter