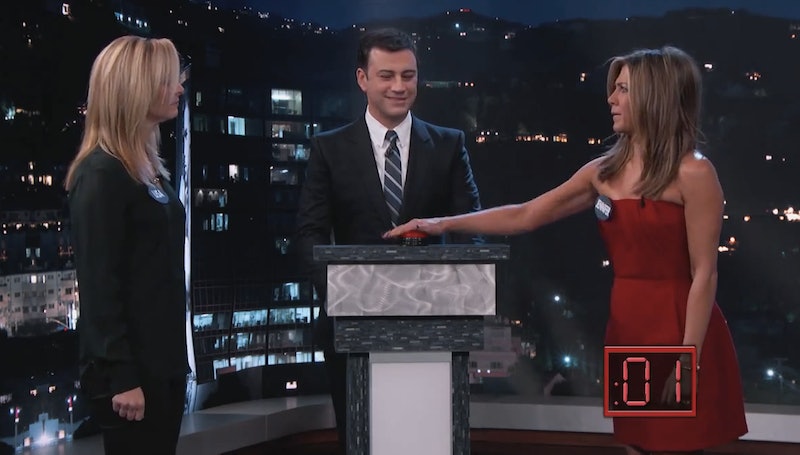 On the last Friends reunion on Jimmy Kimmel Live , things were pretty awkward, but Kimmel has learned from his mistakes. This time around, the late-night host had Jennifer Aniston and Lisa Kudrow in a Celebrity Curse-Off, in which they screamed obscenities at each other that got increasingly more dirty and shocking as the challenge went on. Apparently none of the cast could swear on Friends — they even had to create a hand gesture to swap for flipping the bird — so Kimmel allowed them to make up for lost time with his game. It turns out that Aniston is more like her Horrible Bosses character than Rachel, as she came up with some original swear words that would make your grandmother gasp (or blush, or both).

Some of the words were too crazy to repeat, but among the quick exchanges of curses were holy f*ck balls, f*cking sh*t, sh*t for brains, a*swipe, and some unique twists in French and Greek. These gals are certainly creative, though Kudrow had a leg up for some. "I have a teenage son," she explained. Aniston got so into the game that she knocked her name tag off twice, even sticking it to her head for a round or two. Warning: Once you watch this video, you'll never look at your favorite Friends the same way again.

More like this
Jesse Tyler Ferguson Had A Funny Run-In With A Fellow ‘Modern Family’ Alum
By Grace Wehniainen
“The Door Is Always Open” For Another 'Breaking Bad' Spin-Off, Says AMC Boss
By El Hunt
'The Undeclared War' Took Inspiration From This Gavin & Stacey Location
By Maxine Harrison
'The Undeclared War' Is A Must-Watch For 'Black Mirror' Fans
By Maxine Harrison
Get Even More From Bustle — Sign Up For The Newsletter