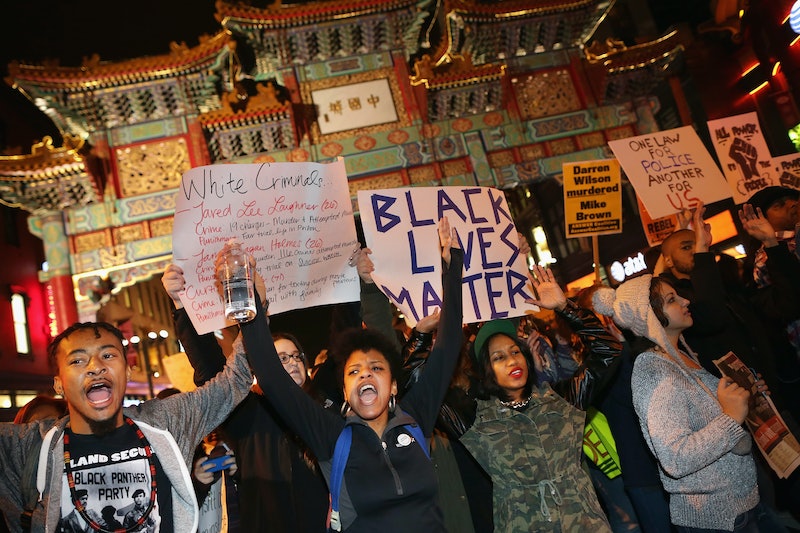 UPDATE: A total of 44 arrests have been made in Ferguson the day following the news that Officer Darren Wilson would not be charged in the death of unarmed teen Michael Brown. Though the protests in the suburb initially began as peaceful, demonstrators began to vandalize the area. According to St. Louis' police chief Jon Belmer, some of those arrested were booked for assaulting a police officer, while others were taken into custody for possession of a weapon.

EARLIER: It's been 24 hours since St. Louis Prosecuting Attorney Robert McCulloch announced that Officer Darren Wilson would not be charged for shooting and killing unarmed black teen Michael Brown, and response to the decision is not ramping down anytime soon. Though the protests in Ferguson, Missouri — the site of Brown's murder — garnered the most attention on Monday night, thanks to its tear gas- and fire-laden scene, marches around the nation began with McCulloch's announcement and continued right into Tuesday.

The response outside of Ferguson has been peaceful, and protestors are hoping their methods will lead to recognition of their cause, which hopes to call attention to the racial unrest that still persists in this country, as proven by Brown's murder. As CNN reports, demonstrators in Chicago led by the Black Youth Project performed a sit-in at City Hall, while New York City demonstrators halted cars by protesting in front of one entrance of the Lincoln Tunnel. But the support for Michael Brown and the citizens of Ferguson doesn't stop there. The entire country not only watched the events unfold on their television screens Monday night, but also joined the fight on Tuesday. Just see this stunning graphic from CNN, showcasing just how widespread the outrage following McCulloch's announcement is.

It's unclear as to whether or not the protests on Tuesday night outside Ferguson will be as calm as those that took place on Monday night. So far, the gatherings have been peaceful, serving only to block traffic in cities like Oakland (where demonstrators chanted "Shut it down for Michael Brown"), Atlanta, and more.

As for Ferguson itself, BuzzFeed reports that at least two protestors have been arrested in the suburb on the protests' second night, but activity has, at publication, not matched the severity of Monday's demonstrations.

Earlier Tuesday, emotions following the verdict reached fever pitch with the release of a segment of George Stephanopoulos' sit-down with Wilson, in which the officer said he had a "clean conscious" despite the outrage following Brown's death. "I know I did my job right," he says in the interview.

And now, it seems, protestors are ensuring that they do their job right on day two of the Ferguson protests.