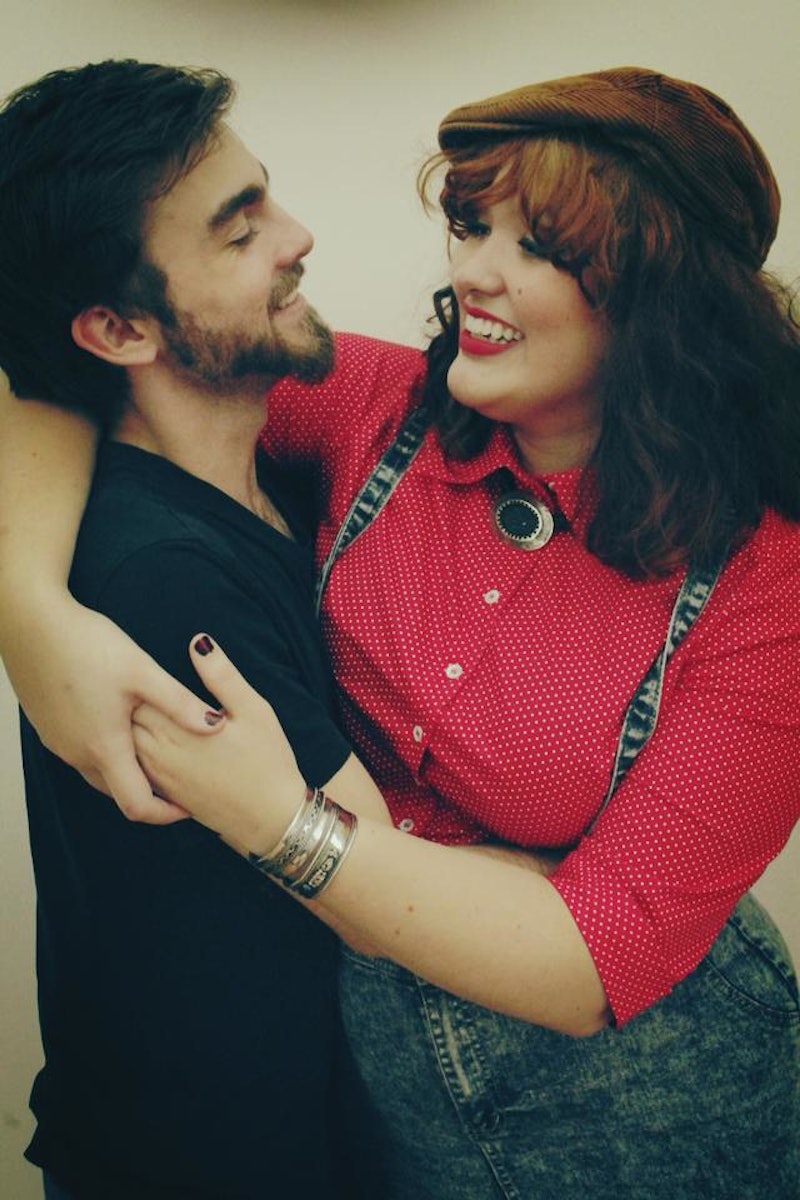 I didn't date for a long time — far longer than [I think] is considered usual or acceptable amongst teenagers and twentysomethings. It wasn't that I didn't want to, per se. I guess it would've been nice to have company at all those miserable, Katy-Perry-fueled homecoming dances or yes, the prom. It would've been nice to not feel like the other when it came to exploring my sexuality (something I just didn't do). Of course, I tried to act like it was intentional — like I just didn't see the point in wasting my time on all those Forked River-ites who wore too much Billabong and burped their ABCs (it was a fascinating revelation that they even knew their ABCs). But the reality was that I didn't really feel like I could date. It wasn't that I was fat, or horribly concerned with how a boy would perceive that fatness. It was more that I was taught that a woman (especially a fuller-figured and tall woman) must only date a man who was even more fuller-figured and taller than she was. You know, so he could "slim" her down, and make her seem more "womanly" or "dainty" or whatever. Life's priority and all.

The majority of my family — both of my parents and EVERYONE else — firmly believe(d) that the woman of a heterosexual relationship was meant to be the slimmer one of the party of two. I don't think these beliefs were sparked by inherent anti-feminism or anything. Rather, from the image we all see out there. From the Kevin James's and Steffiana de la Cruz's of the world. It's OK — it's right — for a big dude to have a skinny wife. He can protect her and look after her and make her feel and look like a princess. But for a girl to be bigger than her guy? Well, she may as well be castrating him of all his manly cis-glory and strength. It would be offensive. And she'd look even fatter (can't you just hear all those audible gasps in the distance?)!

Us, as Jesse Pinkman and Walter White.

And so, I believed them. I believed them all. And as a result, I spent most of high school and early college either refusing to date (and passing up perfectly lovely guys because they were thinner or shorter than me). Until I met the guy, that is (and I don't say that to be cheesy or naive or to claim that we're the "greatest couple in the world"). He was perfect for me. He was kind, unable to tell a lie with a straight face, funny, nerdy, creative and musical. He respected and encouraged every dream and every goal to implant itself into my brain. But, of course, he was two inches shorter and 100 pounds lighter. What was I to do?

When I first introduced Paddy to relatives a year after we'd gotten together (because that first year was spent whilst I was studying abroad in Europe, and so meeting anyone in the family was pretty impossible and unnecessary — it was glorious), the obvious reactions ensued. I could tell that my parents (divorced but still practically the same person) were disappointed that he was so small, when I was so big. They expected me to bring home the aesthetic equivalent of Christopher Hemsworth, I guess. And I had brought home Cory Matthews. I would be lying if I said that it didn't bother me — that it didn't make me wonder whether I'd done something wrong, or chosen a partner prematurely. To them, it didn't matter that he was intelligent or loving or good; it just mattered that I would be the one carrying my boyfriend over the threshold someday.

I'm happy to say I got over it. Logic and love prevailed over sizeism and antiquated gender roles! I started to see our size difference as funny and cute. These days, I love being the big spoon in the relationship and feeling like I am Paddy's teddy bear. And I never feel unsafe or unprotected, emotionally or physically, due to our size difference. He has my back; I have his. And it doesn't matter that mine is way bigger.

That being said, people don't always get it. It's not just my parents; it's a lot of people. To see a larger woman with a smaller (be it shorter or skinnier) man just isn't the norm (unless the woman is a tall and statuesque model — then it's OK). So in the course of these three years, here are some things I've heard and been asked.

Just as it would for everyone and anyone else. It's really not that complicated. Same genitalia, you know.

2. "Does it bother you that he can't pick you up and spin you around?"

Actually, Paddy does put in a good effort when it comes to this one. But in the end, I can give myself a good twirl anyway.

3. "I just wouldn't feel like a woman if I was the bigger one in the relationship."

This one tends to come from women who are actually quite strong, feminist role models and personal inspirations of my own. And so, it's all the more proof that this [quite frankly] nonsensical gender role is one engrained in all of our minds, at least to an extent.

5. "What'll happen on your wedding night?"

Often referring to the whole threshold thing. If we get married, I'd happily carry my bae into our honeymoon suite and smile all the way.

It's just so scandalous, isn't it? I'm a real Allison Reynolds.

Traditionally, lots of us are taught this without even realizing it. In some ways, it's not much different to the stigma surrounding "checkerboard couples," (Penny Pingleton and Seaweed J. Stubbs forever).

8. "You do realize being next to a smaller man will make you look way bigger, right?"

This is the main reason I was taught not to go for for anyone slender. But the idea that in order for a woman to be worth anything she must be thin is not one I support, or feel the need to perpetuate. I fell for a guy. He happens to be thin. That is all.

I don't know why this is even an assumption. It's like the whole "big feet" thing. But no. Just no. And why do you even care?!

10. "What if you break him? I mean, you could quite possibly crush him!"

Contrary to popular belief, being thin doesn't always equate to being exceedingly fragile. But regardless, the right amount of "crushing" is totally fun (insert winky face here).

I'd like to think that I'm the kind of person who values personality over aesthetics. Had Paddy been tall and buff, I probably would've been just as likely to fall for him based on who he is. The reality is that passing up a kind and honorable guy just because he isn't big is ridiculous. And with that, going for a guy who is tall and buff but not actually a nice person is even more ridiculous.

More like this
Experts Say These 23 Things Won't Happen In A Strong Relationship
By Carolyn Steber
The Most Compatible Life Path Numbers, According To Numerologists
By Kristine Fellizar
The 3 Most Compatible Matches For Life Path 1s
By Kristine Fellizar
15 Ways To Tell Someone Was Just Talking Behind Your Back
By Carolyn Steber
Get Even More From Bustle — Sign Up For The Newsletter