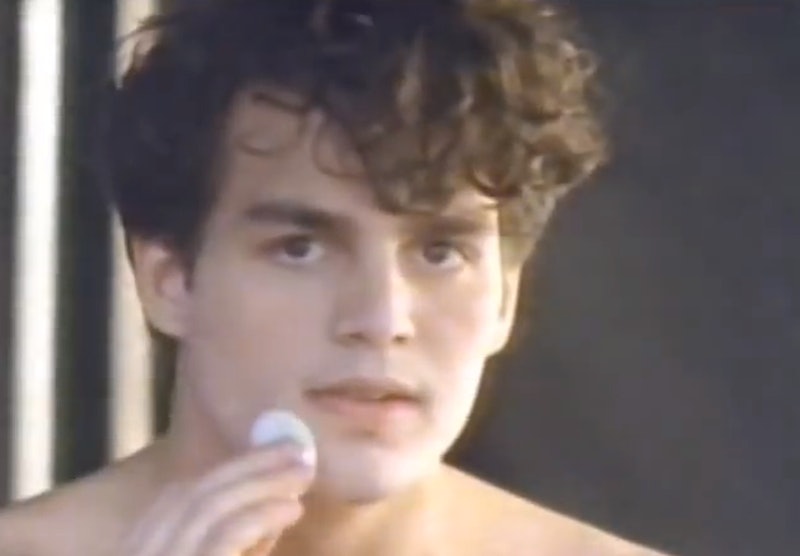 As a little pre-weekend treat, Mark Ruffalo shared a vintage Clearasil he starred in onto his Tumblr today. It made me have many questions, many questions, primarily: Who's out there, making the conscience life decision to follow that that Tumblr? Well, bless whoever did, so we could bring this treasure to light.

Said ad, first brought up in a Variety interview with Jessica Chastain, got Ruffalo a casual $30,000, and he earned...every penny as you can tell from this incredible acting job. The 1989 (that's the year Taylor Swift was born, kiddies) commercial has a baby-faced Ruffalo applying Clearasil Double Clear to battle all two pimples that plague his gorgeous visage. Because Clearasil is apparently some kind of acne-killing sorcery that I've never had in my arsenal, all two of those zits instantaneously disappear, leaving Ruffalo a hunksicle with a clear complexion. He ends the video with five lovely ladies on his arm, like Leonardo DiCaprio on a slow day.

Awkward as the whole thing is, Ruffalo's in good company: a blonde Blair Waldorf, aka Leighton Meester also starred in a Clearasil ad before her big break. Because, you know, it's realistic to believe that the shined porcelain Meester calls skin would ever have a zit on it.

Anyway, check out this sweet throwback below!

More like this
The WAGatha Christie WhatsApp Messages Have Been Released — & They're Wild
By Sam Ramsden
Prince Harry Spoke Out About Archie & Lilibet’s Futures And What Worries Him The Most
By Sam Ramsden
Twitter Can’t Get Enough Of The WAGatha Christie Trial
By Nola Ojomu
Bustle Newsletter: May 26, 2022
By Stephanie Talmadge
Get Even More From Bustle — Sign Up For The Newsletter