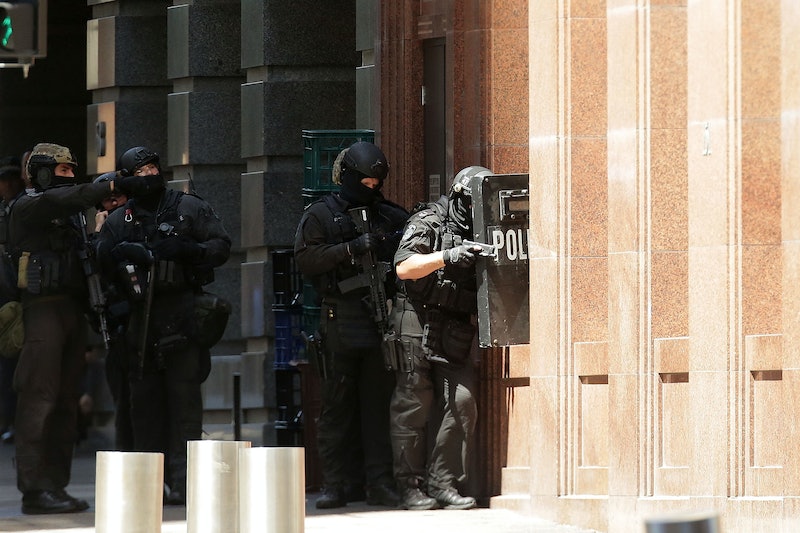 As news broke Sunday night, a truly frightening, ongoing hostage situation has emerged in Sydney, Australia. At a Lindt cafe in Martin Place, at least one gunman has reportedly taken at least a dozen hostages (possibly many more, based on conflicting reports). The man, reportedly armed with a shotgun, forced some of the hostages to hold a black flag against a window bearing the Shahada, a Muslim affirmation — "there is no god but Allah and Muhammad is his prophet" — that's been used by different Islamic militant groups, including al Qaeda and al-Shabab. The result has been predictable: the hostage situation in Sydney fueled Islamophobia across social media, particularly on Twitter.

First, a necessary disclaimer, because I've already sifted through a lot of this stuff on Twitter — caring deeply or affectingly about one issue doesn't mean you should or must shut your heart and mind to others. I think it's entirely within our capabilities as reasonable people both to condemn terrorist acts, acts that may be committed from a place of extreme, zealous religious faith, while acknowledging the grueling and awful bigotry countless peaceful adherents could end up suffering as a result.

In fact, it's very easy for a fair-minded person to do this — because, as we can see in the United States' own, largely Christian society, even the radical or fundamentalist members of major faiths don't decide to make the leap toward enacting violence on others. Being a Muslim, even a conservative or strident one, is not the same as being a hostage-taker or a terrorizer, a fact which a lot of people seem dangerously willing to throw aside. It's an ugly sight.

Of course, some people can't help but drag President Obama into this, as though any world leader can prevent individual incidents like this with 100 percent certainty. Or as if, when he's talking as Islam as a peaceful faith, he was tacitly excusing acts of hostage-taking by extremists.

Thankfully, there are some corners of Twitter where cooler heads are prevailing.

It'll be worth keeping a close eye on the hostage situation going forward — as of late Sunday night it's still ongoing, and hopefully everybody makes it out okay.