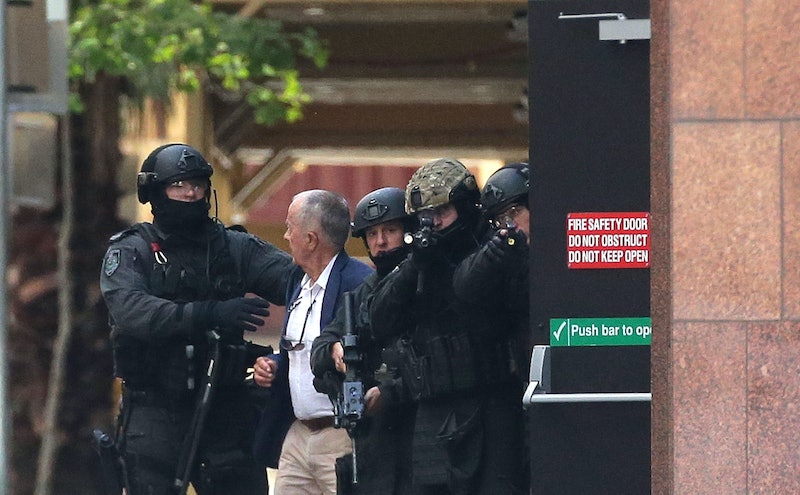 As night fell in Sydney, the lone gunman reportedly holding a group of hostages at the Lindt chocolate shop and café began making his demands. According to CNN affiliate Sky News Australia, the Sydney gunman contacted local media outlets with his demands, including a phone call with Australian Prime Minister Tony Abbott and a flag representing the Islamic State of Iraq and Syria. The gunman's motivation is still unknown to authorities; so far, six hostages have been released.

Hadley did not put the hostage on air, and eventually handed the conversation over to authorities. He added that a woman also called into his show Monday night, saying her 18-year-old son was currently being held hostage at the chocolate shop and cafe.

Mark Burrows from 9 News Australia reporter told ABC News that he also spoke with two hostages. "I think No. 1 was that he [the gunman] wanted to speak to someone with authority, but mainly the prime minister," Burrows said.

Sky News Australia reported that the gunman has also made bomb threats, claiming he had four bombs hidden throughout the busy Sydney area — two bombs inside the cafe and two in Sydney's Financial District.

Although the gunman has allegedly requested an ISIS flag, authorities do not know yet if the man has any direct links to the terrorist group currently waging war in Iraq and Syria. However, Sydney police has confirmed to local news sources that they know the identity of the man, though his name has not been released.

CNN also reported that the gunman has been referring to himself as "The Brother" and allegedly claimed this was an Islamist-linked attack on Australia.

One gets the impression that this individual [the gunman] is a self-starter, self-radicalised. He is not necessarily being directed by a major transnational terrorist group like IS, but he is certainly motivated by the ideology. ... Ultimately he has achieved a number of objectives. One is the major disruption it has created throughout Sydney. Two is the propaganda. Oxygen of publicity is very much the IS narrative.

Earlier on Monday, eyewitnesses said they could see several of the hostages standing at the shop's window, holding up black flags with Arabic messages such as "There is no God but Allah." Now that it's well past midnight on Tuesday in Sydney, Sky News Australia said the gunman has turned off the shop's lights, keeping the hostages in the dark.

Authorities told reporters late on Monday that negotiators have made contact with the gunman and, so far, they don't believe he has harmed any of the hostages.