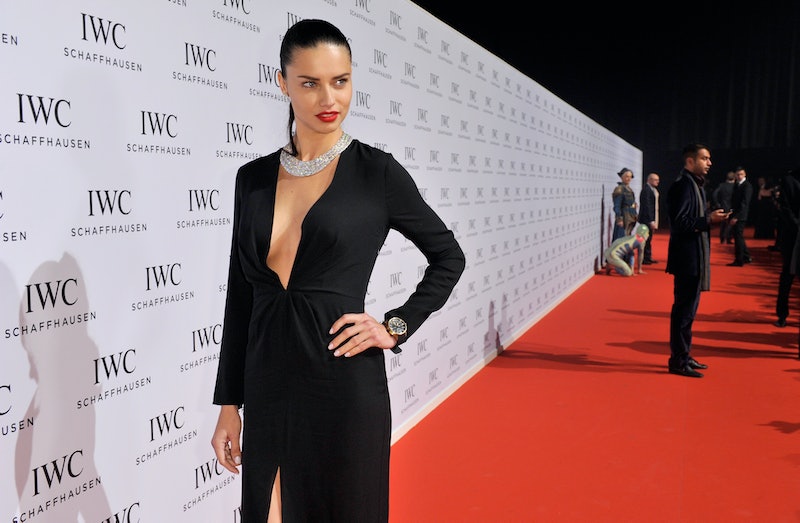 What could possibly be hotter than a Victoria's Secret Angel? How about your lunch order from Chipotle? According to a bizarre Twitter poll, Adriana Lima is less beautiful than a burrito. Um. Okay.

There is so much "WTF???" going on here that I honestly don't know where to begin. Let's start with the facts. According to LostRemote, a Twitter account called @ItsFoodPorn posted a tweet on December 9 (the night the Victoria's Secret Fashion Show aired on television) posing the question, "whose more beautiful? RT for chipoltle burrito, FAV for VS Angels" beneath two side-by-side photos, one of a mouthwatering cross-section of a rice-and-beans-stuffed burrito and one of a crowd of Angels with Lima in the center. Unfortunately for Lima, Chipotle beat her by a long shot — the tweet received 8,237 retweets compared to 4,282 faves. I guess people really love their burritos, huh?

An infographic created by analytics company Canvs further illuminates the results, stating that 14 percent of tweets from that night with the word beautiful in them addressed Adriana Lima, who modeled one of this year's fantasy bras, while 24 percent referred to Chipotle. Damn, those burritos are hot stuff! Surprisingly, the original @ItsFoodPorn tweet was not sponsored by Chipotle.

Not only am I confused by these results, I'm also disturbed by the nature of the poll. I'm not really down with comparing a living, breathing woman to a burrito that has zero thoughts and feelings and is meant to be consumed. It just goes to highlight how we treat women, especially famous women, like objects that are meant to be assessed only by their physical appearance. Plus, have you seen Adriana Lima? She's definitely sexier than a pile of rice.