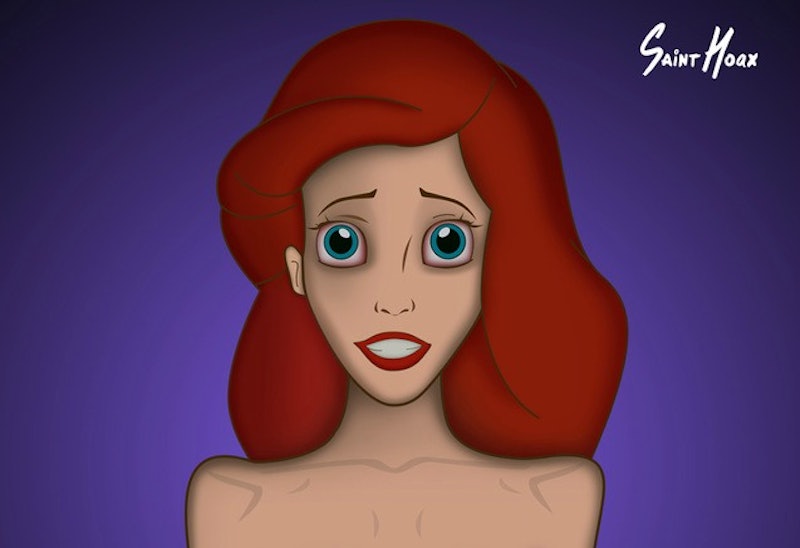 By now, I’ve gotten used to seeing anonymous Middle Eastern artist Saint Hoax use Disney characters to make a point about important topics. Each time, though, they still hit me right in the gut the moment I see them, and his latest series, “The Royal Misfits,” is no exception. This time, Hoax has employed Ariel, Hercules, Prince Eric, and Jasmine to draw attention to eating disorders in children — and the images are just as powerful as all his previous work has been.

Writes Hoax, “Children as young as five years old are being diagnosed with anorexia nervosa. ‘The Royal Misfits’ raises awareness about that subject and directly speaks to children who have developed or are developing eating disorders.” And he’s right — disordered eating in children has been on the rise for years. In 2013, the Telegraph reported that the number of episodes in which pre-teen children have been treated by hospitals for eating disorders had tripled over the previous four years. That same year, Kristi Belcamino wrote powerfully at Salon of her nine-year-old’s disordered eating, describing how difficult it was to fight the illness and how unfathomable she and her husband found it in the first place. Even though they had raised their daughter in a body-positive household, wrote Belcamino, “We soon learned that nothing about an eating disorder was rational. And that the more malnourished our daughter became, the more irrationally she behaved. In other words, the voice telling her not to eat was the most powerful thing in her world.”

In the past, my one complaint with Hoax’s projects have been the limitations of their subjects; “Happily Never After,” for example, focused solely on women as victims of domestic violence and men as abusers, failing to address the fact that men suffer from domestic violence and women can be abusers as well. He did later remedy the oversight with “Prince Charmless,” which flipped the tables on the original series, which was commendable — but this time, he’s hit the ground running right out of the gate.

In just four images, he’s include a huge range of subjects: They are women; they are men; they are white; they are of color; they are athletes; and they are non-athletes. Each character was clearly carefully chosen, and the effect is enormous. Obviously they don’t cover every single possibility — that would be a tall order, indeed — but it’s a step in the right direction. These four subjects nod towards inclusivity, presenting the suggestion of many more subjects beyond them.

See more of Saint Hoax’s work at his website. For resources and support, visit the National Eating Disorders Association website.