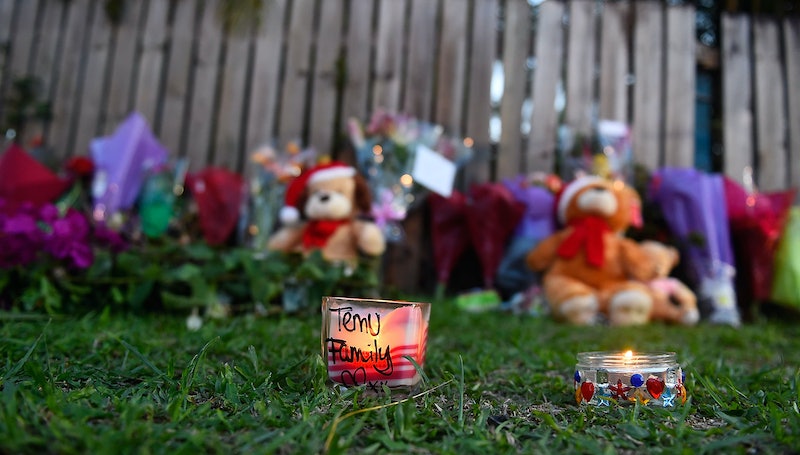 A nation still reeling from the hostage standoff in a Sydney cafe a few days ago faced another horrifying tragedy: eight children were found dead at home in Cairns, Queensland, in one of Australia's most distressing mass murders. The children are believed to be from the same family, and were aged 18 months to 15 years.

Authorities could not confirm the cause of death as they await the coroner's report, but they are alleged to have been stabbed. A 34-year-old woman, reportedly the mother of seven of the eight victims, was found in the home with multiple stab wounds but is currently in stable condition. The Guardian reported that the mother is in stable condition and "assisting with enquiries," although police declined to say whether she was a suspect.

The adult brother of the slain children called police to the scene close to noon on Friday local time, after discovering his siblings' bodies in Manoora, Cairns, a suburb in the northeastern section of Queensland. Relatives and neighbors broke down in tears as they approached the scene. Detective Inspector Bruno Asnicar told The Guardian that the incident was among the most serious in his career, and that it was "very distressing" for the police officers.

Reporter Scott Forbes at the Cairns Post talked to some members of the extended family and told Sky News:

Many of the people here are actually connected to the family or relatives of the family. They are very shocked. They said they were a happy family and were enthusiastic about Christmas. They've said she was a very proud mother who was very protective of her children, so everyone lining the streets here is reeling right now.

The house has since been cordoned off, and Asnicar said there was no formal suspect as he assured an anguished community that there was no need for public concern, according to ABC Australia. He told reporters:

As it stands at the moment, there's no need for the public to be concerned about this other than the fact that it's a tragic, tragic event.

The news out of Cairns is heartbreaking... This is an unspeakable crime.

The tragedy comes at a trying time for a nation still dumbfounded by Monday's dramatic 16-hour siege that left three dead, including the hostage-taker. The hostage situation in Sydney shook the nation to the core, as brushes with terrorism are rare in a country typically known for being a laid-back, prosperous and socially progressive.

Candlelight vigils were held on Friday evening to remember the victims. The neighborhood is mostly comprised of Aboriginal Australians, reported Reuters, and known to have a high crime rate — although it is not clear whether that has anything to do with Friday's incident.