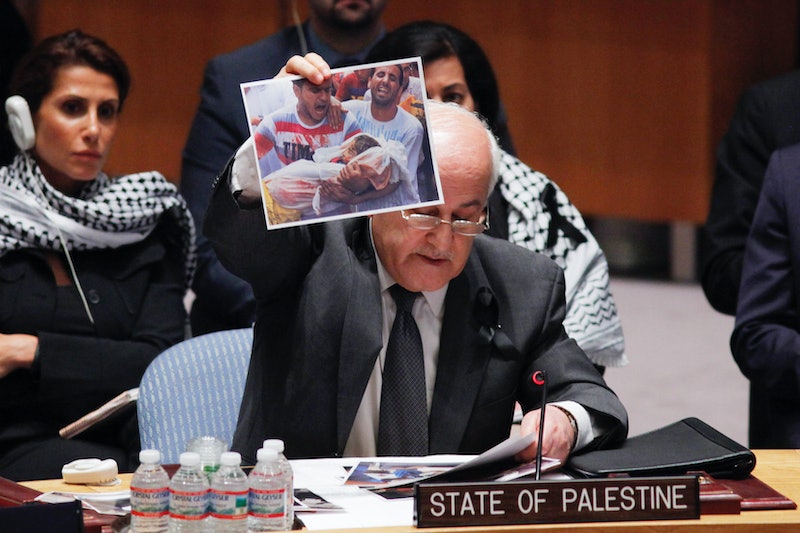 The day before New Years Eve did not bode well for Palestinians, as the UN Security Council rejected a resolution for Palestinian statehood on Tuesday that called for, among other things, an end to the Israeli occupation of Palestinian territory by 2017. The draft received eight votes in favor, one short of the minimum nine required for its adoption. Both the U.S. and Australia voted against the measure.

Had there been nine "yes" votes, however, the resolution would still have failed to pass, as the U.S., who wields veto power as a permanent member on the Security Council, would have most definitely exercised it. Washington, along with Israel, is a fierce opponent of the Palestinians pursuing a state through diplomatic channels in the UN, preferring instead that they Palestinian statehood be achieved through active negotiations — of which there have been many, all of which failed — sans third-party deadlines. According to Al Jazeera, the U.S. said it could not support the draft resolution because it was not constructive and failed to address Israel's security concerns.

The resolution, in a copy obtained by Reuters, had called for negotiations to be based on pre-1967 territorial borders, before the Six-Day War in which Israel seized the West Bank, East Jerusalem and the Gaza Strip. It also called for the settlement of all major disputes — or "final-status issues" — within a year, the end of the occupation by late 2017, and the establishment of a "third-party presence" to oversee Israel's withdrawal from Palestinian territory and guarantee Palestinian sovereignty.

Other details include occupied East Jerusalem to be the capital of a Palestinian state, the end to building detrimental Israeli settlements in the West Bank, and resolving the question of releasing Palestinian prisoners, Al Jazeera reported.

The U.S.' opposition to the resolution was widely expected, as the Obama administration has previously voiced its disapproval of the Palestinians' decision to submit a statehood bids to the UN. Before the vote on Tuesday, State Department spokesperson Jeff Rathke said in a press briefing that the U.S. did not think the measure advanced the goal of a two-state solution, adding:

[W]e don’t think this resolution is constructive. We think it sets arbitrary deadlines for reaching a peace agreement and for Israel’s withdrawal from the West Bank, and those are more likely to curtail useful negotiations than to bring them to a successful conclusion.

Further, we think that the resolution fails to account for Israel’s legitimate security needs, and the satisfaction of those needs, of course, is integral to a sustainable settlement.

Having known of the U.S.' opposition, Riyad Mansour, the Palestinian ambassador to the UN, said the Palestinians would present the resolution regardless, asking for the Security Council to finally "shoulder its responsibility."

Perhaps the adoption of the resolution was not the Palestinians' end game. After this year's pathetic breakdown of negotiations between Israelis and Palestinians that its mediator, Secretary of State John Kerry, blamed squarely on the Israeli government for reneging on the release of Palestinian prisoners and continuing to build illegal settlements despite having promised not to, the Palestinians have been frustrated at the lack of progress in negotiations.

The Palestinians have attempted to achieve an end to the conflict through other means — namely, seeking statehood through international organizations of which it is a member. They have cautioned before that should the resolution not pass the Security Council, they were prepared to bring Israel to the International Criminal Court (ICC) for charges of war crimes.