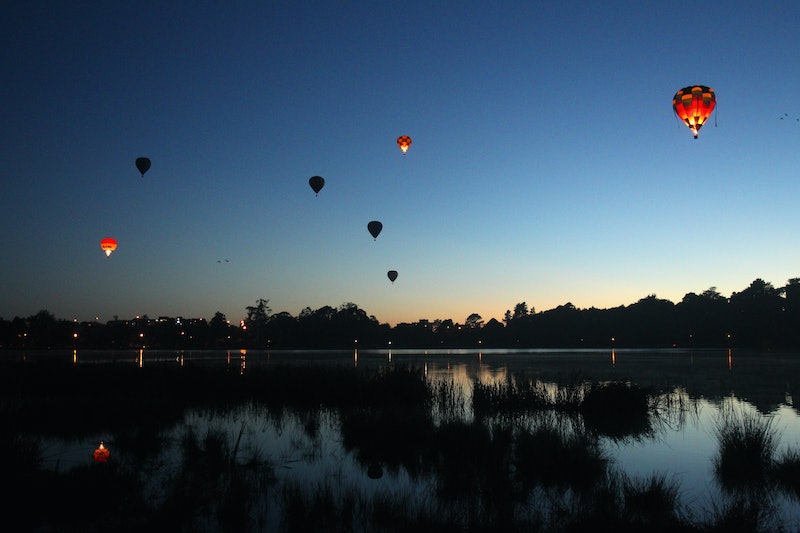 Of all the things that were pretty impossible to see coming this year, the international fracas over The Interview takes the cake. What's by all accounts a lackluster Seth Rogen and James Franco comedy (I haven't seen it, myself, but its dismal scores are suggestive) about a TV host being commissioned to assassinate North Korean dictator Kim Jong-un, the tumult that's followed its history and release has been staggering. And now, the plot is thickening even further — a South Korean activist intends to balloon-drop The Interview into North Korea, hoping its anti-Kim Jong-un climax will help wound the oppressive personality cult built around him.

Amid all the tumult of the film's release — the Sony hack (still of unknown origin), the decision to pull its release, the backtracking after President Obama got involved, and its Christmas Eve release in theaters as well as online — the question of how South Korea would react to it was an equally vital one. Park Sang-hak is the man behind this balloon-drop scheme, a North Korean defector who fled to South Korea nearly 15 years ago, and has since been engaged in tireless activism against the regime.

He's done things like this before, previously having used balloons to send money, candy, anti-government leaflets, noodles, and South Korean soap operas across the border, all aimed at swaying the public with some tantalizing treats forbidden by their own rulers. In this case, the balloons will carry both DVDs and USB drives containing copies of The Interview.

The plan isn't perfect, sad to say. Technology access in North Korea is lightyears away from what it is in South Korea, with computers being a privileged good that requires government approval, as detailed by The Independent. As such, there's no telling how many people will actually get to see the film, and if they do, they're likely putting themselves in extreme peril — North Korea poses ghastly risks for dissenters, with several torturous, starvation-riddled concentration camps which citizens can land in for a variety of minor infractions against the state. Viewing a movie depicting Kim Jong-un's assassination would most certainly qualify.

But this has been the calcified state of affairs for literally decades, and Park Sang-hak is trying to shake things up, to pierce the strictly-enforced, endless adulation of the Kim family. And it's fairly obvious that the North views him as an enemy, if not a threat — according to South Korean officials, he was the victim of an assassination attempt back in 2011, by an agent who'd hoped to stab him with a poisoned needle.

It's unclear when the latest balloon-drop will take place just yet, which makes sense — you can't hand out all the details of a clandestine protest action, after all — but it's expected to take place over the next few months, as the winds turn more favorable to the cause. It'll be worth keeping an eye out to see if this has a major impact on tensions in the border regions, as in the past the balloons have drawn gunfire from North Korean forces.