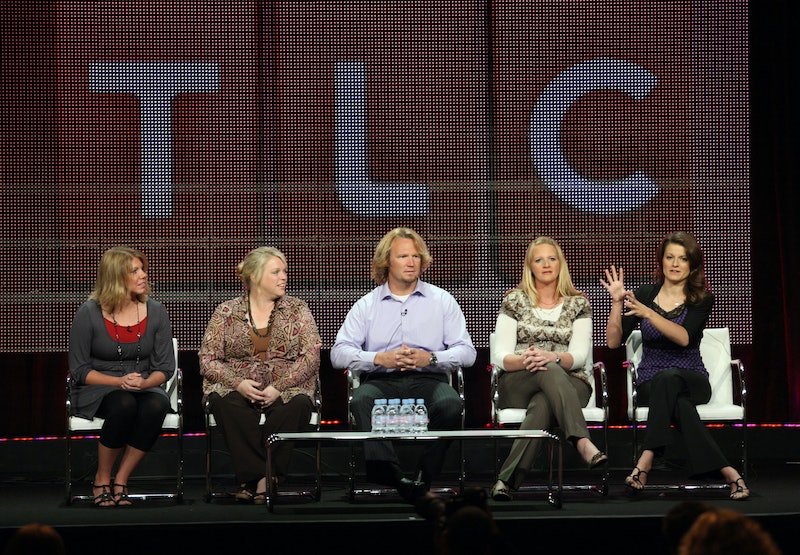 The Brown family may not be welcoming a fifth bride into the bunch any time soon, but what about another child for the Sister Wives ? Despite some really serious rumors, the Sister Wives tell-all denied that Robyn is pregnant last July. Nothing on her Twitter suggests that she is carrying a fifth child. I may need some help interpreting Robyn's supposed Pinterest account, but there don't appear to be any hints their either. Even the wives' TLC blogs haven't been updated since 2013. I can stare at pictures all day, but I'd need more clues. However, since Mormons can't have alcohol or caffeine anyway, I'm not sure what signs I would be looking for in this case. The show returns on Jan. 4 for eight episodes to conclude the fifth season and presumably, these episodes were filmed earlier in 2014. If Robyn is pregnant, we're sure to learn more about it this season.

Honestly, it looks like she and Kody Brown have their hands full with their youngest child, Solomon! He was only born in 2011. I've never raised one child, let alone 17 children, so maybe I'm not the one to make judgements. Sure, five of the older children have now moved out during school year. That frees up some space and attention from Kody's end. Still, I would think that the prospect of another newborn in the house would be overwhelming. Then again, I don't have my own cul de sac and a wealth of free babysitters and hand-me-down clothing. Perhaps the timing is right for Robyn and Kody. If it makes them happy, I'm all for more Browns.

On a more serious note, the question of Robyn being pregnant seems to cause some hardship among the four Brown wives. Pregnancy is already a touchy subject for Meri Brown, who appears to be getting out on her own in lieu of trying to have more children. Christine also left the room during an interview from the tell-all episode, though on Twitter she said that it was an unrelated to the question of Robyn having more children.

Hopefully if Robyn is pregnant or chooses to have a baby anytime soon, it will be nothing but positive for the entire Brown family. Remember when Robyn offered to surrogate for Meri? That was so sweet! But maybe there's nothing to worry about. Sometimes rumors are just rumors and with a family that big, people are always going to be expecting more.