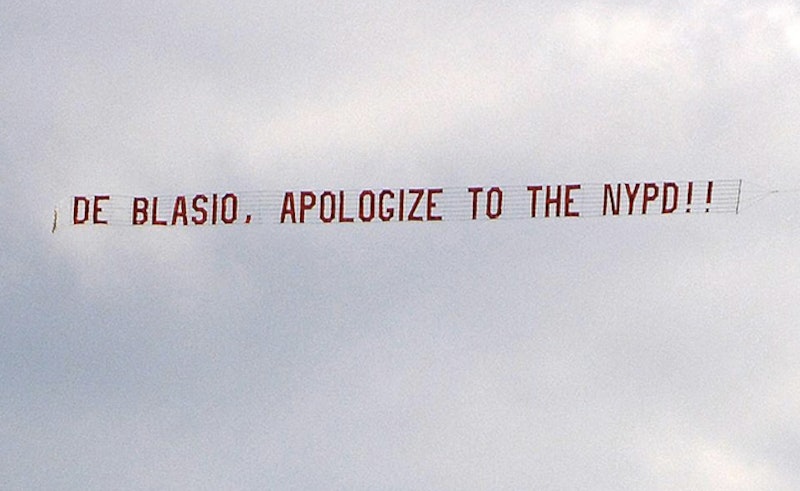 New York City Mayor Bill de Blasio is not having a very good time. The police unions condemn him, the police officers give him a cold shoulder, and to add insult to injury, his drama is being aired out in the skies. Yes, really. On Wednesday, a plane with an anti-de Blasio banner flew over New York City, reminding all 8.4 million residents that the NYPD is more than a little miffed with the progressive mayor.

The New York Daily News captured a photo of the plane's banner, which flew over Manhattan at 2 p.m. on Wednesday. The banner declared in large, red lettering: "De Blasio, Apologize To The NYPD!!"

According to The Daily News, the plane was being flown by Jersey Shore Aerial Advertising, a popular banner-towing company in the tri-state area. The pilot of the plane, Ashley Chalmers, told the news source that the banner would most likely make an impact because it was one of the busiest days of the year for New York City:

It’s New Year’s Eve, the city will be packed with people. It will be hard for me to say how many people will see it. It’ll be seen all over Staten Island, on the Verrazano, and on Brooklyn and Manhattan.

The banner was reportedly commissioned by Michael Sheehan, a retired corrections officer and the son of a NYPD detective, according to The Daily News. Sheehan said in a recent, critical statement of de Blasio:

The reason my father came home everyday was because none of his bosses placed him in such peril as you are doing with your mouth, Mayor de Blasio.

Surprisingly, Sheehan isn't the first de Blasio foe to hire an airplane towing company to publicly condemn the embattled mayor. On Dec. 26, a plane with the banner, "De Blasio, Our Backs Have Turned To You," also flew over New York City. According to NY1, the banner was paid for by John Cardillo, a retired NYPD officer, and hundreds of current and former NYPD employees — or so Cardillo claimed.

The NYPD have been feuding with de Blasio since the non-indictment of Officer Daniel Pantaleo for the chokehold death of Eric Garner in Staten Island. The chasm between the mayor and the nation's largest police force grew deeper less than two weeks ago, when two NYPD officers were fatally shot in an execution-like attack while on patrol in Brooklyn. The gunman, who took his own life shortly after the killings, reportedly tied the attack to the deaths of Garner and Ferguson, Missouri, teenager Michael Brown, pinning the shooting as a sort of retribution for police violence.

At a funeral for one of the slain officers, Rafael Ramos, last Saturday, hundreds of members of the police force turned their backs on de Blasio as he gave an eulogy. A spokesperson for the mayor's officer said in a statement issued last week:

This is a time to think about the families and honor our fallen officers. Dividing people won’t help our city heal. We’ll continue to stand with responsible New Yorkers who are doing the right thing in a time of pain.

The mayor reportedly met with leaders of New York City police unions on Tuesday, but tensions still remain high, according to those who attended the meeting. Patrolmen's Benevolent Association President Pat Lynch, who recently said de Blasio had "blood on his hands" for the murders of two officers, told reporters on Wednesday that "there was no resolve."