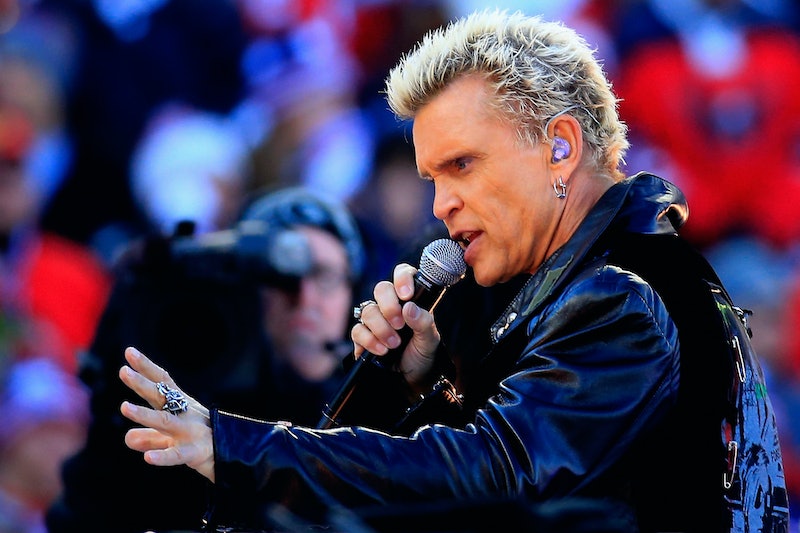 The Washington Capitals may have beat the Chicago Blackhawks during the 2015 NHL Winter Classic, but that's not the most talked about thing of the hockey game. The web was all aflutter about Billy Idol's performance at the Winter Classic. For you non-hockey fans out there, the Winter Classic is a hockey game played outdoors on New Year's Day. So, yes, the hometown Capitals beat the Blackhawks despite the glaring sun, but viewers were more interested (and baffled) as to why the aging British rock star was chosen to kick off the game. And they took to Twitter to express their feelings of wonderment.

Some people feared that Billy Idol trending meant he was the first celebrity death of 2015. But don't fret Idol fans, he proved that he's alive and rocking. Idol's performance included "White Wedding," as well as "Can't Break Me Down" from his 2014 album Kings & Queens of the Underground. And I'm sure promoting the new album was one of the major reasons Idol was at the hockey game. Now, most tweets were not kind to the rocker, but his performance made more sense to me for the game than Gavin DeGraw's. I mean, if Billy Idol can't pump you up to watch men checking each other, who can?

Here's a video of part of his performance:

Although the whole thing was a bit bizarre, I appreciate that his vocals weren't prerecorded (unlike many other musicians at live events). But the Twittersphere decided to focus on the less positive — which led to tons of hilarity. So here are some of the best mean tweets about the Billy Idol Winter Classic performance.

More like this
Jake Daniels Just Became The UK’s First Active Football Player To Come Out As Gay Since 1990
By Sam Ramsden
What Is Jeanie Buss' Net Worth? The Lakers President Is Uber Rich
By Hugh McIntyre
Twitter Is Upset About The 'American Idol' Top 3 Results: "Who TF Is Voting?"
By Jake Viswanath
Stormi Just Walked A Red Carpet With Mommy Kylie Jenner & Daddy Travis Scott
By Hugh McIntyre
Get Even More From Bustle — Sign Up For The Newsletter