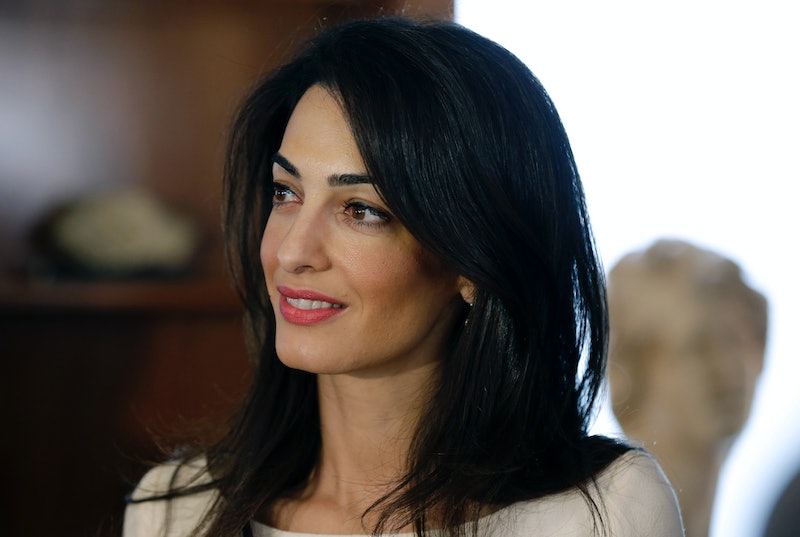 British human rights lawyer Amal Clooney was threatened with arrest by Egypt after she published comments criticizing the nation's corrupt judicial process. In an interview with The Guardian, Clooney said a report she had written on behalf of the International Bar Association has angered the Egyptian government so much that officials warned her legal team they would respond with detention if the findings of the report were ever presented in Egypt. Clooney currently represents one of the three Al Jazeera journalists sentenced by an Egyptian court to up to 10 years in prison for false news broadcasting, allegedly aiding the Muslim Brotherhood, and other "terrorist" charges.

The accomplished human rights lawyer — who was also named Barbara Walters' 2014 Most Fascinating Person of Year, but not for the right reasons, so we won't talk about that — contributed to the report in early 2014, well before she took on embattled journalist Mohamed Fahmy as her client. The critical report looked at ways in which "prosecutorial independence can be compromised in Egypt," and concluded the government's Ministry of Justice is given too much power over judges, "providing scope for abuse."

Clooney and her co-authors recommended the Ministry of Justice stopped hand-picking judges for certain high-profile cases — a complaint leveraged against the case of the three Al Jazeera journalists, who Clooney and the news company believe are being falsely imprisoned. Clooney recently told The Guardian:

That recommendation wasn’t followed, and we’ve seen the results of that in this particular case where you had a handpicked panel led by a judge who is known for dispensing brutal verdicts. And this one was no different.

Clooney added to The Guardian that even before she took on Fahmy as her client, the Egyptian government was threatening her about the strongly worded report:

When I went to launch the report, first of all they stopped us from doing it in Cairo. They said: ‘Does the report criticise the army, the judiciary, or the government?’ We said: ‘Well, yes.’ They said: ‘Well then, you’re risking arrest.’

Fahmy, along with fellow journalists Peter Greste and Baher Mohamed, were granted a retrial at an appeal hearing on Thursday. The three journalists were denied bail as they prepare to head back to criminal court. They are seeking release or, in the worst-case scenario, a lesser prison sentence.

A spokesperson for Al Jazeera said on Thursday:

Baher, Peter and Mohammed have been unjustly in jail for over a year now. The Egyptian authorities have a simple choice – free these men quickly, or continue to string this out, all the while continuing this injustice and harming the image of their own country in the eyes of the world. They should choose the former.

Fahmy, Greste and Mohamed have been imprisoned in Egypt for more than 370 days. Supporters of the journalists, including human rights group Amnesty International, claim their detention and conviction was unjust and politically charged. "All three are prisoners of conscience, targeted simply for exercising their right to freedom of expression in carrying out legitimate activities as journalists," Amnesty International's Deputy Director Hassiba Hadj Sahraoui said in a statement.

More like this
Sarah Everard’s Killer Wayne Couzens Is Appealing His Whole-Life Sentence
By Sophie McEvoy
LGBT+ Men Fleeing Afghanistan Were Denied Asylum By The Home Office, New Findings Show
By Sam Ramsden
How To Fight For Reproductive Rights, Based On How Much Time You Have
By Courtney Young
The Music Industry Continues To Fail Black Women
By Precious Adesina
Get Even More From Bustle — Sign Up For The Newsletter