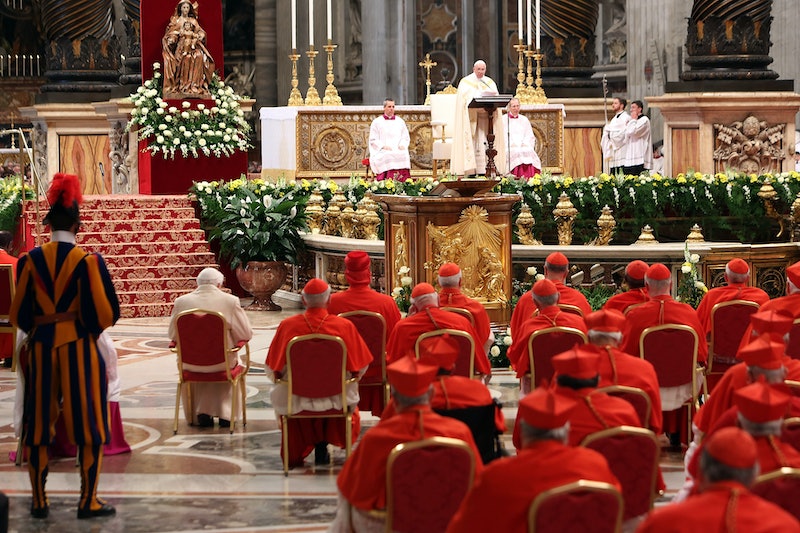 Defying norms is one of Pope Francis' best known traits now, and on Sunday, surprising us all again, the Argentinian Pope named 15 new cardinals reflecting the church's diversity and its growing influence in developing countries. The new cardinals hail from 14 different countries, and three that never before had a church member in the role of cardinal.

The 15 new members are chiefly from Africa and Asia — Ethiopia, Thailand, New Zealand, Myanmar and Cape Verde, among others. In a speech at St. Peter's Square, the pope named the new cardinals and noted that every continent was represented, showing "the inseparable tie with the church of Rome to churches in the world." The Vatican's chief spokesman, Rev. Federico Lombardi, said that Cape Verde, Myanmar and Tonga received their first ever cardinals, USA Today reported.

The first Latin American pontiff made clear with his pickings the gravity of his intentions with the church's identity shift. He has said repeatedly that the Catholic church had to reach out to those on the margins. The new cardinals will be there to assist Francis as he maneuvres his way through church reforms, against resistance from the more conservative blocs of the church. Among other duties, cardinals elect the pope's successor.

[C]onfirms that the pope doesn't feel tied to the traditional 'cardinal sees,' which reflected historic reasons in various countries. Instead we have various nominations of archbishops or bishops of sees in the past that wouldn't have had a cardinal.

The Associated Press noted that some of the pope's picks were advocates of matters close to his heart — Archbishop John Atcherley Dew of Wellington, New Zealand, urged a Catholic church with a more positive, optimistic outlook, and Monsignor Francesco Montenegro of Italy and Archbishop Alberto Suarez Inda of Mexico are vocal and active proponents of human rights.

Since his papacy began on March 2013, the reform-minded Catholic leader has been an outspoken critic of the church's stiff, traditional ways. His Christmas message in December last year was a scathing criticism on what he called the Vatican bureaucracy's hunger for fame and power, accusing them of "spriritual Alzheimers."

With his choosing of the new, diverse group of cardinals, Francis has now picked over a quarter of the cardinals eligible to elect the next pope. BBC's Religious Affairs Correspondent Caroline Wyatt said that cardinals appointments are the most authoritative of ways for a pope to shape the Catholic Church.