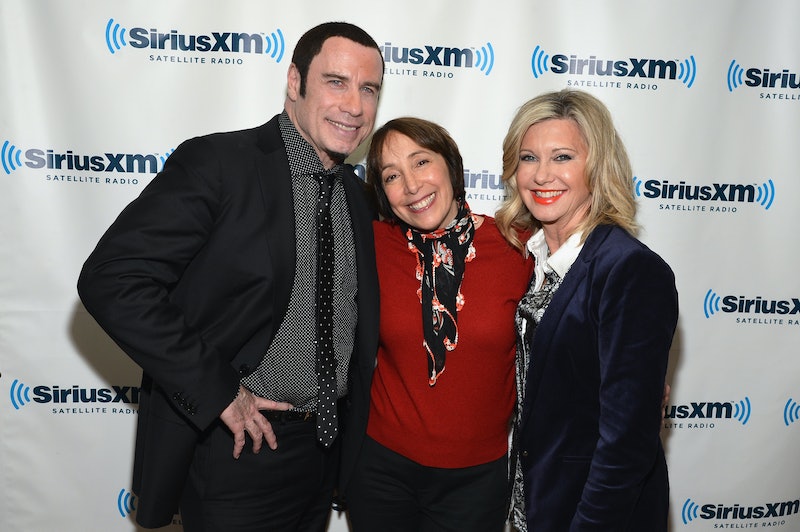 Romantic soul mates are an overrated and tired concept. Work kindred spirits are really where it's at. Someone should really get on the ball and make a romcom about what a rare yet beautiful thing it is to bond with someone over half-priced drinks and mutually hated co-workers. But, alas, it doesn't always happen that way, especially in Hollywood. It seems that we often hear of instances where co-stars of beloved series or movies actually hated each other, kind of undoing the magic of their onscreen chemistry, which gives us the sads. Thankfully, that is not the case with Grease co-stars, Olivia Newton-John and Didi Conn, aka Sandy and Frenchie, who still make time to hang out and support each other 36 years after the film's premiere.

To make matters even more gratifying (if possible), Just Jared reports that Conn was there not only to watch her old friend do it up, but to sing a duet with her as well. But this wasn't just any old duet, peeps. Conn was the Danny Zuko to Newton-John's Sandy in an epic performance of Summer Nights. So yes, it is OK to regret every life decision that didn't lead you to Las Vegas this weekend to see this happen in person. If you're like me, and couldn't make it to see Sandy and Frenchie in action, than perhaps these nostalgic reminders below will serve as a place holder until you can dust off your old Grease VHS and pop that into the last remaining VCR in the country, at your grandma's house.

Frenchie, the Original Hipster, Rocking Pastel Hair Before It Was Cool

Originating the Best Song to Ever Grace a Karaoke Stage

Alright, go ahead. Sing along, you know you want to:

More like this
Stop Everything – A Take That Film Is In The Works
By Sabah Hussain
Harry Styles Performed A Snippet Of Taylor Swift’s “22” & The Crowd Went Wild
By Jake Viswanath
Shocked Fans & Former Co-Stars React To Ray Liotta’s Death At 67
By Grace Wehniainen
'Stranger Things' Star Joe Keery Is Dating An "Indie Scream Queen"
By S. Atkinson and Grace Wehniainen
Get Even More From Bustle — Sign Up For The Newsletter