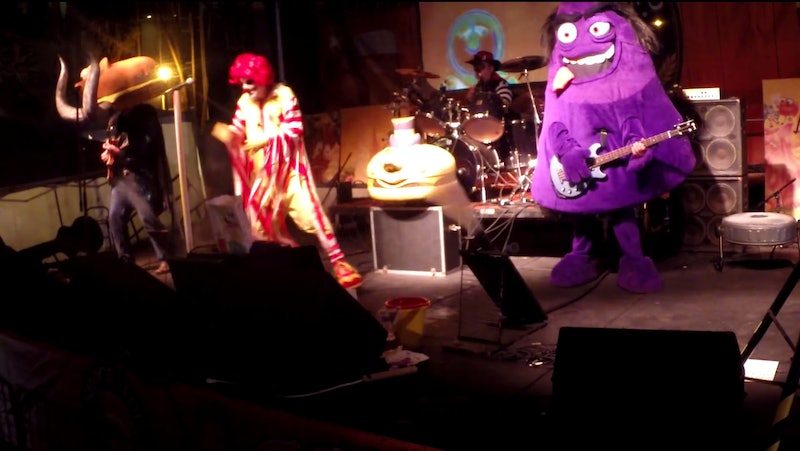 Guess what, Black Sabbath and McDonald's fans? Your love of Ozzy and the Quarter Pounder has paid off, because the universe (read: the Internet) has given us Mac Sabbath, a Black Sabbath cover band that sings about McDonald's. According to Facebook, Mac Sabbath has actually been around for the last three years, but just started performing recently. If you watch their live performances, you will be wonderfully greeted by dark, twisted translations of the chipper McDonald's characters we are probably familiar with.

The bass player—Grimace, the purple monster who is usually in a fine-and-dandy mood—is characterized to look perma-crazed with his tongue sticking out. The Mac Sabbath version of Ronald McDonald (on lead vocals, naturally) looks like someone went a little crazy with black liquid eyeliner when doing his makeup. His shredded gear makes him look more pirate than clown, and it's wicked. Lead guitarist Mayor McCheese and the Hamburgler, who is the drummer, are equally frightening.

Mac Sabbath's songs are pretty much what you would expect them to be: rife with McDonalds puns and hilariously morbid. "Iron Man" has been turned into "Frying Pan," and "Paranoid" is now "Pair-a-buns." The lyrics are equally brilliant: "I once burned your meal/My old job was cooking veal," "Everybody wants it/On gluten bleached flour bread." Must. Have. Album. Immediately.