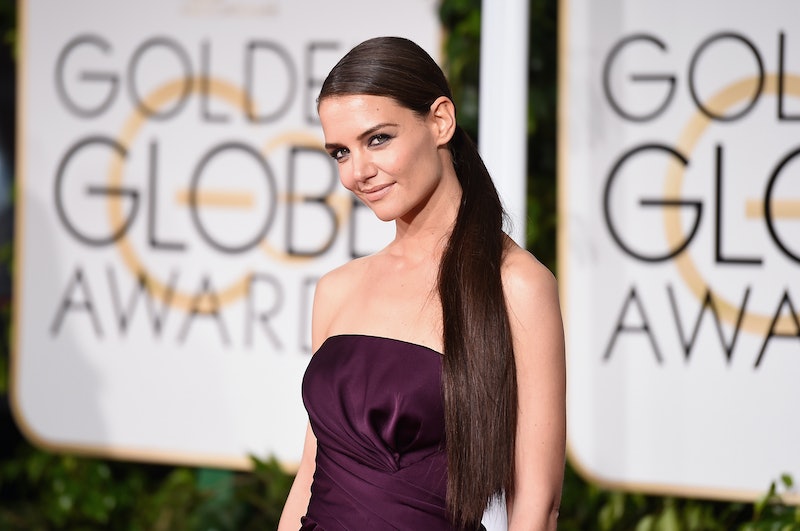 It's been a night of incredible victories at the 2015 Golden Globe Awards, all of which have been very well deserved. One that immediately comes to mind is that of Matt Bomer, who won Best Supporting Actor for his unforgettable role in The Normal Heart. However, it wouldn't be a true award show if there wasn't a tiny glitch in the process. Upon announcing the winner, presenter Katie Holmes mispronounced Matt Bomer's name, referring to him as BOMBER, instead of BOMER. That's right, folks. It looks like we've got another John Travolta situation on our hands. (Is this becoming contagious or something?)

To be fair, though, Holmes' faux pas is a lot more forgivable than messing up Idina Menzel with Adele Dazeem. (Sorry, Travolta, but it's true.) But still. This is THE Matt Bomer we're talking about. Girl should know how to properly say his name. However, this wasn't even the first time this night that Bomer's name was misrepresented. On the red carpet, Ryan Seacrest pronounced it in the exact same way as well, which is possibly where Holmes heard it in the first place? Either way, Bomer appeared to shrug off both mishaps with no trouble, proving once again what a true gentleman he is.

It's stuff like this that makes the Globes interesting, I suppose. But in the future, might I suggest the presenters perhaps consider doing a little research on their assigned nominees before taking the stage? They've worked hard to get to this point and screwing up their name — while fans find it highly amusing — could prove to be a slight annoyance to the actual winners.

Check out Holmes' mistake in the Vine below. And while you're at it, take an extra shot with your friends in honor of the incredible Matt Bomer and his Golden Globe win. This one's for you, Bomer. You're the BOMB! (Er, too soon?)

More like this
Everything To Know About A Million Little Things' Reported Final Season
By Brad Witter
Penn Badgley & Leighton Meester Met On A Horror Movie Set Before 'Gossip Girl'
By Jake Viswanath
50 Years After Creating Her Alter Ego, Angelyne Is Still Driving That Pink Convertible
By Gretchen Smail
Yes, Billboard Queen Angelyne Really Ran For Governor Of California
By Brad Witter
Get Even More From Bustle — Sign Up For The Newsletter