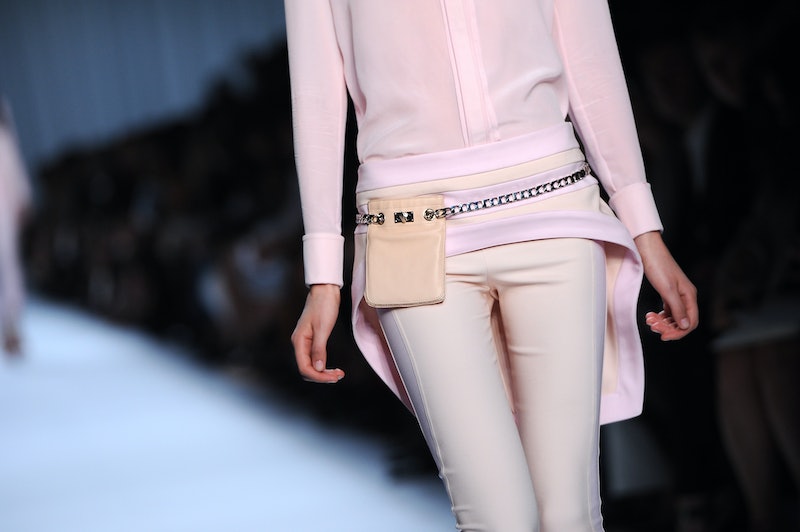 There are some resurgent trends which should be withdrawn as soon as they attempt to come out of retirement, and then there are those which ride the borderline between chic and farcical. Fanny packs belong to the latter party, a fad which has come and gone over the years despite its associations with jorts-wearing tourists at Disneyland. Now, with the appearance of the FlipBelt, it appears the trend has been adopted for fitness gear.

Akin to a stretchy headband for your waist that holds everything from keys to phone, the FlipBelt is a People Magazine-approved workout accessory that boasts handy pockets for a smartphone, cash, keys, and whatever other items you might have to hold on to for a workout. The $28.99 FlipBelt comes in ten shades, from understated black to neon pink, and, to its credit, does look like the control top panel of a pair of yoga pants — at least until you cram it full of "essentials".

Quite honestly, the FlipBelt looks like an entirely utilitarian accent for those who work out consistently and find lugging around a gym bag tiring. And indeed, it's not the Chanel fanny pack the iconic brand attempted to bring back for Fall 2014, or the "belt bag" Rachel Zoe inexplicably designed for Spring 2013.

The FlipBelt is a sartorial toss-up; you may end up with an accessory that makes keeping fit a simpler feat, or you may find yourself dubbed "El Gonso Con La Rinonera" for your How I Met Your Mother-esque hands free belt satchel. It really depends on how confident you are in your decision to fully rock a fanny pack.

More like this
Iris Law's Skunk Mullet Is Not For The Faint-Hearted
By Tomi Otekunrin
10 All-Denim Outfits Inspired By Billie Eilish, Bella Hadid, & More
By Allie Fasanella
Dua Lipa Just Took A “Pre-Show Dip” In A Dreamy Thong Bikini
By Allie Fasanella
‘90s Streetwear Brands That Are Making A Major Comeback
By Dominique Norman
Get Even More From Bustle — Sign Up For The Newsletter